The Island of Tulipatan (Light Opera of New York) 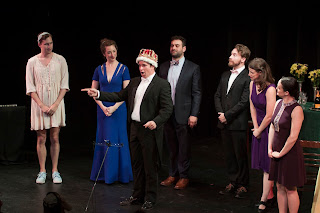 
LOONY shifted gears this spring from its annual early American operetta (usually by Herbert or Kern) and mounted instead an altogether delightful production of that master of the French operette’s Jacques Offenbach’s 1868 one-act “L’ile de Tulipatan” in a highly amusing and witty translation by Gregg Opelka (lyrics) and Jack Helbig (dialogue).

The zany plot (original libretto by Henri Chhivot and Alfred Duru) concerns the Duke of Tulipatan (Victor Khodadad) who disdains the gentle and feminine ways of his would-be successor son Alexis (Claire Kuttler). But little does the Duke know, that years before, his right-hand man, the Grand Marshall Romboidal (Chad Kranak), had contrived to let the Duke, at his wit’s end after having sired nothing but daughters, believe his latest daughter was a boy. Similarly, Romboïdal’s wife Théodorine (Heather Jones), in order to protect her son from one day being conscripted by the war-mad Duke, contrived, unbeknownst to Romboïdal, to bring him up as a girl named Hermosa (an exuberant Tom Mulder gamely cavorting in a short dress). Now, the distinctly unladylike girl is clearly showing a preference for manly things, like martial drums. The situation naturally leads to all sorts of gender-bending misunderstandings.

Daringly, even when Alexis and Hermosa discover their own true identities, it seems to matter not a jot if the object of their affections is the same sex. Of course, all gets sorted out by the end. 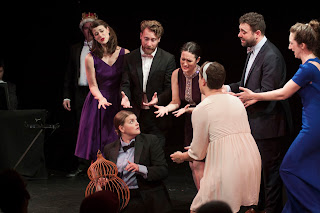 The amusing plot brought out some of Offenbach’s most delicious music, and with Music Director Tyson Deaton at the keyboard, and excellent voices all around, the score, from the overture onward, sparkled. The concerted duck couplets with its periodic “quack” sounds during the Duke’s entrance song (he disdains his bad press much like a certain resident of our Oval Office), a wacky Barcarolle (a far cry from the one in “Hoffmann”), and the father/”daughter” duet wherein Hermosa is totally nonplussed by the revelation of Alexis being a girl were particularly winning.


The cast members act as well as they sing, and have great fun with the farcical goings on. Mulder and Kuttler mined all the requisite laughs from their roles, and were especially appealing in the wooing scene where Hermosa teaches Alexis how to propose to him/her. Khodadad and Kranak made a fine pair of bewildered fathers. Jones’ asides to the audience about her “secret” and her florid aria when she announces she’s leaving the room,were excellently done.

Director Gary Slavin, a master of this sort of material, brought out all the humor of the piece. And though there was plenty of slapstick, it didn’t interfere with the music.

The evening began with a short selection of seven rather predictable  “Offenbach Favorites.” I must confess I’d have preferred rarities, and three of the numbers weren’t even from Offenbach’s vast catalogue of operettas, but his grand opera “The Tales of Hoffmann.” Still, the cast performed them more than competently in French in a sort of salon setting, “hosted” by Kranak. 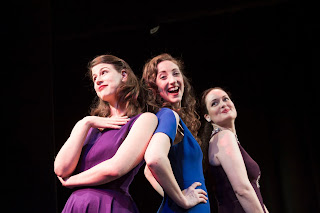 The good news is that Albany Records has since recorded the “Tulipatan” part of the bill with an orchestra. It will be very nice to have this particular translation on record. This was the pattern last year, when Kern’s “Sally” was played in performance with piano accompaniment only, but with more instruments added for the CD.

That recording, incidentally, is quite delightful, and represents the only modern recording of the work that gave us “Look for the Silver Lining” and other Kern gems.

Next up from LOONY is a potpourri evening entitled “My Song Goes 'Round the World,” described as “a musical exploration of the composers and performers who defined operetta on both sides of the Atlantic in first half of the twentieth century.” The performance will take place on June 8th at the National Opera Center at 330 Seventh Avenue.

Photos by: Keith Butler Print this post
Posted by Harry Forbes at 4:22 PM