The Roundabout (Brits Off Broadway) 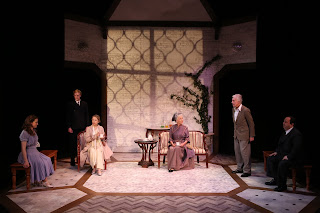 
Here’s an interesting 1932 curiosity, albeit from arguably the lower drawers of British playwright J.B. Priestley’s catalogue. This is, in fact, the first professional production in many years. Initially, the play was intended for the young Peggy Ashcroft, but when finally completed, it was mounted without her in Liverpool over the Christmas season.

It has subsequently played in rep on various occasions, but never in London until this present production from the Cahoots Theatre Company, in association with The Other Cheek and Park Theatre.

The plot is roughly this: young Pamela (Emily Laing) returns home to her industrialist father Lord Kettlewell (Brian Protheroe), who has not seen her since she was a child. She has spent time in Russia where she has become an avowed Communist, and shows up with her traveling companion, the earnest Comrade Staggles (Steven Blakeley), who blatantly disdains all the trappings of bourgeois society but seems to have a penchant for the finer things in life anyway, as well as tfor he ladies.

Kettleworth is in serious financial difficulties and is embroiled in business concerns with his secretary Farrington Gurney (Charlie Field). But Pamela is but one of several unexpected and mostly inconvenient guests at her father’s estate, including his ex-wife, Lady Kettlewell (Lisa Bowerman), his clinging mistress Hilda (Carol Starks) who finds she must ward off the amorous Staggles’ advances, his old friend Chuffy (Hugh Sachs), and the imperious gossipy dowager Lady Knightsbridge (Richenda Carey). At one point, the butler Parsons (Derek Hutchinson) comes into money which motivates the plot still further. And there’s Alice (Annie Jackson), the maid, who also becomes a target for the lovelorn Staggles.

The structure and attitude is somewhat reminiscent of Shaw, and the play seems to want to say something serious about the changing of the social order of the era,  but that aspect is treated rather superficially, and at the end of the day, this is really just a benign comedy of manners. But it's an enjoyable one at that.

The standouts in the overall agreeable cast are Laing, Blakeley, and Sachs.

Though not frankly the most scintillating of comedies nor social satires, the play does have its pearly moments and witty lines (many of them courtesy of the sardonic Chuffy), and is certainly of interest to anyone interested in Priestley who went on to write such better crafted and more substantive gems as “Dangerous Corner,” “An Inspector Calls,” and “When We are Married.”

But props to director Hugh Ross for unearthing the rarity, and to the Brits Off-Broadway team for giving us the opportunity to see it.