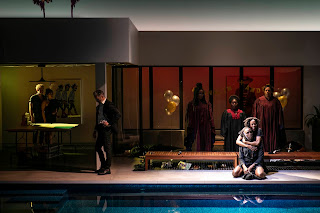 
Kinney also composed the original music and arrangements with Darius Smith, who did the vocal arrangements for the three-member gospel choir (Carrie Compere, Denise Manning, and Onyie Nwachukwu) who appear, Greek chorus-like, throughout the play.


Providing colorful support as Franklin’s self-absorbed (but loyal) friends are Tommy Dorfman as out-of-work actor Max and Kahyn Kim (very funny) as his best friend, the superficial but ultimately sensitive Bellamy, and Hari Nef as Alessia, the enthusiastic curator and gallery owner mounting Franklin’s first show, a collection of so-called “coon baby” dolls, with which she hopes to make her mark.


The most vital part of the drama involves the conflict between Andre and Zora. One can’t help feeling that, in reality, a man in Andre’s position would probably not be so welcoming of his lover’s mother under his roof, nor that Zora, so obviously critical of their lifestyle, would last more than a couple of minutes there. But without her staying, of course, there’d be no drama.


Young playwright Harris writes very well indeed, with some deliciously lively exchanges, and dialogue that rings true. But despite the artful symmetry of the three-act structure -- each with its own mood and perspective on Franklin -- the basic dramatic arc doesn’t quite earn its three-act, two-hour and forty-five minute running time. The last act especially, though the most extravagantly theatrical of all, doesn’t ultimately offer a satisfying payoff.


Nonetheless, this is, for the most part, a highly absorbing evening, and a work of quality from a playwright to watch.