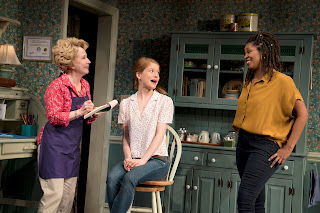 
Playwright Bekah Brunstetter, a producer and writer for TV’s “This is Us,” has cooked up a deft mix of issue play and comic feel-good piece, inspired by those recent headline stories about businesses that refuse to provide services for gay couples on religious grounds.


Debra Jo Rupp, who played the mother on “The 70s Show,” gives a thoroughly delightful performance as the amiable Della, owner of a North Carolina bakery, whose belief system and that of her like-minded husband Tim (Dan Daily), lead to her saying a reluctant no when Jen (Genevieve Angelson), daughter of Della’s late best friend, asks her to bake a cake for Jen's impending marriage to Macy (Marinda Anderson), a black woman with strongly progressive views.


Della believes in “following the directions,” a phrase she repeats several times, and that clearly applies not only to recipes but to her firmly held religious beliefs as well. In a sidebar plot, Della is also very much counting on an upcoming appearance on “The Great American Baking Show,” and throughout the play, there are fantasy sequences wherein she imagines conversations with the disembodied voice of the show’s host (also Daily), exchanges which comment on the action of the play.


The store -- with its yummy cake display and candy-colored motif --  is, like the other settings, most attractively designed by John Lee Beatty, and brightly lighted by Philip S. Rosenberg. Tom Broecker’s costumes are also in keeping with the light tone of the piece.


As Jen, Angelson is wonderfully sincere and marvelously conveys her own deep uncertainty about the step she is about to take, as she is, after all, a product of the same community standards as Della. As the object of her deep affection, Anderson manages to be likable, while avoiding the stridency of a part that could easily be played that way.


What's especially commendable about Brunstetter’s approach is that all sides are treated in balanced and humane fashion, helping us really get under the skin of each character. The sweet-natured approach is totally engaging, even if weightier legalities of this hot-button issue are skirted. Lynne Meadow has directed with just the right lightness of touch and the production, firmly anchored in Rupp's appealing performance, is consistently funny and touching.