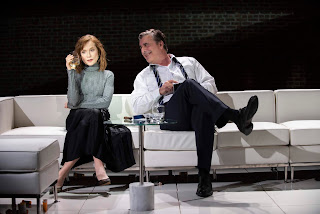 
This is the earlier written companion piece to French playwright Florian Zeller’s “The Father,” which Manhattan Theatre Club presented in 2016 with Frank Langella in his bravura Tony-winning performance as a man in the throes of dementia. What had distinguished Zeller’s treatment of the theme was the brilliant way he told the narrative from the titular lead’s point of view, helping us to understand us more vividly than any other dramatic presentation we’ve seen before the skewered way someone with that unfortunate condition views the world.


In “The Mother,” Zeller gives us a woman unraveling from a severe case of empty nest syndrome. Her beloved son is no longer home, and never calls or visits. She fondly recalls making the boy breakfast when he was a child. (She also has a daughter but seems never to have liked her much.) Her husband is at work all day, and the lady is left home to brood and imagine all sorts of things. She feels obsolete, and dysfunction rules the household.


Zeller’s technique is much the same as in “The Father,” as all the action is played out from the mother’s point of view, and likewise, we never quite know what’s real or simply imagined, as the mother is clearly having a nervous breakdown.


The character is played by the great French stage and screen star Isabelle Huppert who gives a full-out committed performance, pulling out all the stops and then some. It may be unchivalrous to say but I found her Gallic accent at times a bit hard to decipher some of the time. But she’s compellingly watchable throughout.


Still, I had heard a BBC radio adaptation some time ago that featured Gina McKee (who played the role to acclaim in London) in the role, and the relative clarity of her delivery made the play -- intentionally repetitive and confusing -- much more agreeable, I must confess.


In any case, Zeller translator Christopher Hampton has done his customary expert job of transposing the French text, as he did with “The Father,” but I think there’s little doubt that the other play is infinitely superior in its complexity and impact.


The always interesting and resourceful Trip Cullman directs -- with its ever-changing perspective -- with a sure hand.


Chris Noth is the husband of 25 years, who may or may not be having adulterous trysts when he wearily asserts he’s in meetings or attending weekend seminars. Justice Smith is the enigmatic son who’s the Oedipal love object of his overly affectionate mother. Again, fantasy or reality? We never know for sure. And Odessa Young is that girlfriend, and a couple of other roles, including, possibly, a younger version of the mother. All are excellent.


Mark Wendland’s sets, including an impossibly long sectional sofa, suggest the central character’s feeling of isolation and the mother’s emotional distance from the father, as does Ben Stanton’s cold, grey lighting. (Before the play begins, Huppert sits on the that sofa reading while the audience takes its seats.) Anita Yavich’s costumes, including a hot mini-dress that Huppert squeezes into to impress her son, suit the characters aptly. (Smith as the girlfriend later enters in the same attire.) And Fitz Patton’s sound design contributes mightily to the unsettling ambience.


Scenes are often repeated with a slightly different slant, and two of the most hair-raisingly disturbing episodes are, it seems, only the mother’s imaginings.  At one point in my performance, there was a technical snafu with the set (perhaps it was the mechanics of that movable sofa), and the actors were asked to leave the stage and the audience to keep its seats, but such is the construction of the play that many in the audience thought it was all part of the action.


Even at 90 minutes without intermission, and despite Huppert’s entertaining antics, I must confess that this Pinteresque play can seem a bit tiresome (a woman in front of me rudely yawned a couple of times). But Zeller is a playwright to reckon with, and as such, even if it’s a lessor work, “The Mother” should be seen.