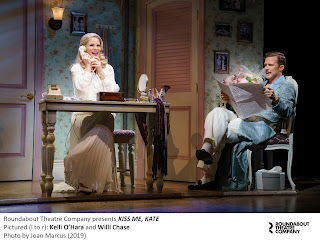 
There’s certainly much to enjoy in this latest revival of Cole Porter’s masterwork, a deft blending of backstage story and Shakespeare’s “The Taming of the Shrew,” even if far from the slam dunk winner which was the last Broadway revival in 1999. Nor is it even as effective as the BBC Proms 2014 staging with Alexandra Silber, Ben Davis, and Tony Yazbeck.


Kelli O’Hara sings gloriously as ever as temperamental diva Lilli Vanessi who, after a middling Hollywood career, returns to Broadway to star with her ex Fred Graham in the Bard comedy. But lovely as she is, the too cool O’Hara simply doesn’t have the natural temperament for the flashing eyed diva (or, even with a red wig, the shrewish Katharine in the play within the play).


Director Scott Ellis has staged her volcanic, character-defining “I Hate Men” number as a staid confessional to the ladies in the audience. And though O’Hara does show fits of rage, and engages in onstage fights with Fred/Petruchio, she’s truly best in the lyrical moments: the rueful “So in Love,” the operetta-ish “Wunderbar,” and her final acquiescence “I Am Ashamed That Women Are So Simple.” As a concession to today’s gender politics, “people” has been substituted for “women” in that lyric, which is lifted almost verbatim from Shakespeare. She does get to show off her operatic chops in an impressive exaggerated cadenza at the end of the first act, a fun touch.


Elsewhere, Ellis has made sure that, at every turn, Lilli/Katharine gives as good as she gets from Fred/Petruchio. No onstage spanking for her in the revision. And Petruchio’s line about Kate not being able to ride a donkey (because she’s sore) has been amended to “Neither of us were in any condition to ride the donkey.” (Amanda Green is credited with additional material, but her revisions have been mercifully discreet.)


The usually excellent Will Chase somehow seems a notch less than ideal here, too. I’d suggest the mustache, meant to look debonair, might have been a misstep. And though he’s in good voice, there’s too much frenetic slapstick. Both his list songs, “I’ve Come to Wive It Wealthily in Padua” and “Where Is the Life That Late I Led” are too hurried, and like O’Hara, he’s most effective in the quieter moments such as “Were Thine That Special Face,” beautifully sung.


In the secondary female lead of Lois Lane (Bianca in “Shrew”), Stephanie Styles is very cute and does what she’s been directed to do well, but this is the the most radical step away from role originator Lisa Kirk’s interpretation I’ve yet seen. Styles plays Lois as the prototypical dumb chorus girl. But at least she has plenty of pizzazz.


On the other hand, Corbin Bleu -- so good in Roundabout’s “Holiday Inn” -- seems just right as Lois’s ne’er-do-well gambling boyfriend, Bill Calhoun (and Lucentio in the “Shrew”). A beautiful singing voice and a wonderful dancer, he brightens all the scenes he’s in, smallish role though it is. His “Bianca” is a high point.


As the gangsters who hold Lilli virtual prisoner in the theater over a gambling I.O.U. to which Bill signed Fred’s name, John Pankow and Lance Coadie Williams were merely adequate. Whether the fault of miking or enunciation, the sure-fire curtain number “Brush Up Your Shakespeare” failed to land as effectively as usual.


Roundabout has dutifully cast the show for maximum diversity and has done it intelligently with one wrong-note exception.


Larry Hockman’s orchestrations and David Chase’s lively dance arrangements freshen the familiar score (though the original charts are still spiffy), and Music Director Paul Gemignani (who did similar honors for the 1999 production) leads the orchestra - split in two boxes on opposite sides of the stage in the usual Roundabout way -- with his customary authority.


Warren Carlyle’s choreography is more than competent but less than exciting. And I didn’t care for the too obvious pelvic thrusting on Lois’ “Tom, Dick or Harry” number (with an unsubtle emphasis on “Dick”). His best work was the second act opener, “Too Darn Hot,” which won enthusiastic applause and bravos. And his work on the ensemble “Shrew” numbers are quite pleasing to the eye, as for instance, ”Cantiamo D’Amore” near the end of the first act, and both act finales.


Overall, the show is colorful, well-paced, and fun. And despite the annoying nods to political correctness in the script, it’s essentially the same “Kiss Me, Kate” we’ve always loved with the Porter songs registering as delightfully as ever.