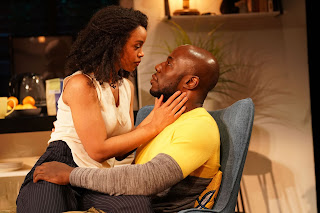 
Talk about up-to-date, and “ripped from today’s headlines,” as they used to say!  Within the first minutes of Loy A. Webb’s debut play about the relationship between Genesis (Mandi Masden), a school principal, and Rashad (McKinley Belcher III), her longtime boyfriend, a fireman and single father, the 30-something couple are deep in discussion about the Brett Kavanagh hearings.


Apparently Genesis is being pressured to fire a teacher at her school for posting something negative on social media about Dr. Ford’s testimony. This leads to a brief argument between the two. Rashad agrees with Genesis’ colleagues that she should be fired; Genesis counters that the teacher has broken no school rules by tweeting on her own time.


Thereafter, the banter between the two drifts back to more congenial matters between these two who have been in a relationship for two years, and some tender canoodling. But when Genesis refuses Rashad’s hard won tickets to a concert that will feature one of their favorite singers on the principle that she feels the headliner on the bill is a hypocrite and his music disrespectful of women, the mood suddenly turns much darker, and contemporary issues having to do with the Black Lives Matter and Me Too movements come blazingly to the fore. Webb, to her credit, is careful not to stack the cards unfairly against one character or the other.


Without giving anything away, suffice to say Masden and Belcher deliver dynamite performances, each running the proverbial gamut of emotions and Webb’s dialogue is, by turns, sassy, fun, believable, and deadly serious.


The play was originally developed at The New Colony in Chicago.which presented the world premiere at The Den Theatre in January of last year


Logan Vaughn has directed with a sure hand, and one hangs on every word. The climax is emotionally devastating, so much so that there’s a post-show talk back so the audience can deal with its feelings.


This 70-minute (sans intermission) work is the premiere production in the black box theater of MCC’s new permanent home, and launches the space in A-plus fashion.


Photo by Joan Marcus
Print this post
Posted by Harry Forbes at 5:59 AM