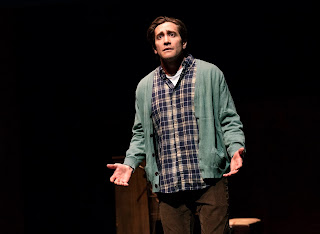 
You won’t find two more accomplished performances in town than those given by Jake Gyllenhaal and Tom Sturridge in these two disparate -- but thematically similar  -- one act plays by British playwrights, each, in its way, dealing with life, love, and humanity.


Though written quite separately, Simon (“The Curious Incident of the Dog in the Night-Time”) Stephens’ “Sea Wall” and Nick Payne’s “A Life” fit together quite naturally, though I gather during the rehearsal process, both playwrights countenanced small tweaks to accommodate the pairing.


The plays -- monologues actually -- are memory pieces. In “Sea Wall,” Sturridge -- in his third play by Stephens -- is Alex, a photographer. Standing atop Laura Jellinick’s two-tiered set, he thinks back to his father-in-law, wife, and daughter and a fateful holiday in the south of France. He eventually makes his way downstage, the narrative taking a tragic turn, which I shan’t reveal, as the gradual unfolding of incidents, in Alex's understandably hesitant telling, is a key part of the drama. 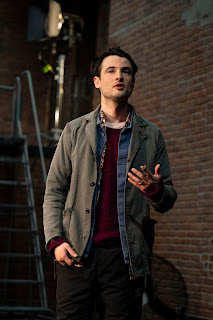 Sturridge is attuned to every painful detail, and reaches true tragic heights by the end. And his reading is so natural and seemingly personal that audience members murmur empathetic responses as if they are hearing a true story, and occasionally speak out the words when he seems to falter.


The same is true with “A Life,” a piece leavened with more humor and allowing Gyllenhaal a more teasing, playful tone, generating laughs even at points where, frankly, there oughtn’t to be any. But today’s audiences are, alas, more attuned to comic delivery than poignancy.


“A Life” blends a semi-autobiographical story about the illness and gradual decline of the narrator Abe’s father with the arrival of a first-born baby. The narrative keeps flip-flopping from one to the other, and one might almost think they’re happening simultaneously, but that’s not the case. Still, it’s clear the earlier incidents involving the father are very much top of mind even in the midst of the later happier event. How can Abe be a father when he still feels very much like a son, he asks poignantly at one critical point.


Gyllenhaal captures the tone of the piece ideally, as he’s clearly in step with Payne’s rhythms, having starred previously in New York in Payne’s “If There Is I Haven’t Found it Yet,” and “Constellations.”


Both he and Sturridge prove themselves master storytellers and command the stage impressively.


Director Carrie Cracknell has steered her stars to give perfectly modulated performances, and despite the vastness the set, has kept overall movement fairly contained, though as the actors pointed out at a post-show talk back, the staging has been modified considerably since the early previews. Gyllenhaal delivers his lines from mostly one vantage point, notwithstanding one sequence that takes into the auditorium, while Sturridge traverses his side of the stage rather more.


The exemplary lighting design, sound, and music by Peter Kaczorowski, Fabian Obispo, and Stuart Earl respectively contribute to setting just the right mood for this intimate and powerful double-header.