All About Steve (20th Century Fox) 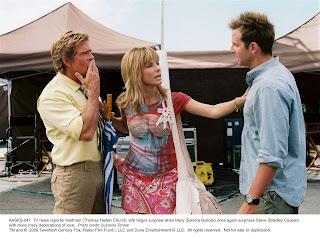 It would be tempting to label the latest Sandra Bullock vehicle, “All About Steve,” a vanity production, inasmuch as Bullock co-produced and is very much center stage of this endless 100 minute would-be comedy, despite a title that would suggest otherwise.

But vanity productions generally showcase their stars in a flattering and appealing light. Bullock’s character, Mary Horowitz, a loveless, work-obsessed crossword puzzle constructor at a small Sacramento paper, is almost unrelievedly annoying from start to finish, and her impersonation of a smart but clueless kook is decidedly unbecoming. (Watch her try to slide down a banister in her bath towel.)

Mary – half-Jewish and half-Catholic, we gratuitously learn late in the film – is temporarily living at home with her parents (Howard Hesseman and Beth Grant). Their daughter has no social life, so they push her into a blind date with the titular Steve (Bradley Cooper), a cable TV news cameraman. Better looking than her usual dates, she forthwith jumps him in the back seat and begins tearing off his clothes (and her own) before the car has even taken off, one of the most distasteful and unfunny such scenes ever.

A phone call from his newsroom gives Steve a quick escape from the randy lady, but her next crossword puzzle – a prankish one devoted entirely to her adoration of Steve – causes a furor among her perplexed fans, and she’s canned.

Kim Barker’s script has some mildly amusing jibes at the media’s love of sensationalism, but we’ve seen all this before. Barker never makes Mary anything but an irritating nut job. Barker, whose script for Robin Williams’ “License to Wed” was equally dire, includes gags about a three-legged baby and a bunch of deaf children who fall into an abandoned mineshaft, and includes such egregious lines as Mary’s cutesy-poo “Thank you for not raping me,” addressed to a truck driver who’s given her a lift.

Later, describing her trademark red go-go boots, Mary cloyingly reveals she wears them because they make her toes feel like “ten friends on a camping trip,” a head-scratching remark meant to be endearing, but just plain trite.

As she continues to stalk Steve, Mary picks up a couple of oddball friends, Howard, who sculpts faces out of apples, and his sweet friend Elizabeth, a likable pair as played by DJ Qualls and newcomer Katy Mixon. Steve's sidekick, field producer Angus, as played by Ken Jeong, is another minor plus.

The lame attempts at pathos and sentiment, as we observe Mary’s manic peculiarities bringing folks together, and the film’s ultimate lesson that it’s OK to be unconventional – register as flat and contrived. Chalk this up as a major misfire for the usually appealing Bullock.

(Rated PG-13 by the MPAA for sexual content including innuendos.) Print this post
Posted by Harry Forbes at 6:05 AM