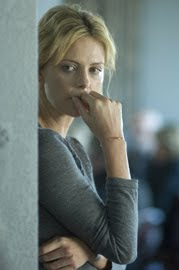 Guillermo Arriaga – scriptwriter for “Babel,” “The Three Burials of Melquiades Estrada,” and “21 Grams” – has made a specialty of the multi-narrative structure with seemingly disparate plot strands (not necessarily in the same time frame) eventually neatly coming together.

He’s used this technique again with “The Burning Plain,” an assured directorial debut, though the synchronicity this time around seriously strains credulity.

Charlize Theron plays Sylvia, a hard-working restaurateur whom we first see emerge from bed with her married lover, a coworker at the eatery, and standing at her window stark naked for all to see. She’s clearly troubled emotionally, but we won’t know why till much later in the story.

Then there’s crop-dusting father (Danny Pino) and daughter Maria (Tessa Ia) who relocate to Texas. Shortly after they arrive, the man has a serious smashup in his plane, leaving his sad-eyed 12-year-old in the hands of his best friend Carlos (Jose Maria Yazpik) who sets out to locate the girl’s mother.

And in New Mexico, there’s the meeting of two teens, the Latino Santiago (JD Pardo) and blonde Mariana (Jennifer Lawrence) who share a unique connection. Their parents – Nick (Joaquim De Almeida) and Gina (Kim Basinger), a cancer survivor, respectively -- were adulterous lover and they perished while having sex when their trailer hideaway went up in flames. Despite the racial divide, the youngsters bond through their mutual grief and curiosity about what brought their parents together.

The cast is uniformly excellent with Theron, who excels in these troubled working-class roles, delivering her usual good work and Kim Basinger also quite effective as the erring, needful adulteress.

The script’s Big Revelation, which you may guess well before it comes, is not quite plausible or satisfying when you connect the dots, but leisurely paced though it is, there's much that is compelling here, and the film holds your interest.

(Rated R by the MPAA for sexuality, nudity and language.) Print this post
Posted by Harry Forbes at 7:43 AM