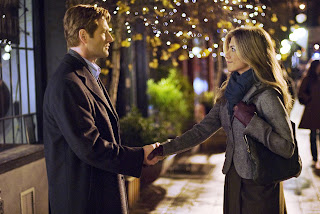 The title suggests a breezy romantic comedy in which its leads – Aaron Eckhart and Jennifer Aniston – will meet cute, and then, bingo, fall for each other. But in fact, this is primarily a serious-minded drama about loss, the grieving process and ultimate acceptance of death and moving on.

Dr. Burke Ryan (Aaron Eckhart), a widower, has become a slick motivational speaker and writer, a sort of grief guru. He’s come to Seattle to give one of his popular seminars on the subject, and plug his book, the blandly-titled “A-OK!”

There, for the first time since his wife’s death, he finds himself attracted to Eloise Chandler (Jennifer Aniston), a florist shop owner, who (guess what?) has just broken up with her boyfriend. Their initial meeting is far from promising. They collide with each other in the hallway of his hotel, and later, when he works up the nerve to approach her in the lobby and suggest a date, she – assuming a sleazy pickup -- rebuffs him by pretending to be deaf. (Huh?)

When he discovers her ruse, they have a terrible fight – he even gives her the finger -- but somehow after their tempers cool, she senses she’s misjudged him, and agrees to dinner. A respectful friendship, burgeoning on romance, develops.

It soon becomes clear that for all his confidence in helping others cope with loss, Burke himself has never gotten over his wife’s death in a car accident three years earlier, and he’s emotionally blocked. The focus of the film – more a vehicle for Eckhart than Aniston – charts how he finally grapples with his loss.

To its credit, director Brandon Camp’s script (co-written with do-producer Mike Thompson) maintains a believable restraint in their relationship. They barely exchange a kiss through most of the movie. But the fact remains the script never gives their characters a chance to spark. It’s admirable that the script speaks seriously about loss and, but the glossy tone of the film is somehow at odds with that intent.

Still, their performances cannot be faulted and the film generally coasts on their easy-going appeal.

There are some other solid performances here, too, including Dan Fogler as Burke’s agent trying to land him a multi-media deal, Frances Conroy as Eloise’s mother, and most especially, John Carroll Lynch as bereft father shattered at the death of his son, and Martin Sheen as Burke’s crusty father-in-law. Sheen and Eckhart share the film’s climatic dramatic scene, shamelessly sentimental but undeniably effective.

(Rated PG-13 by the MPAA for some language including sexual references.) Print this post
Posted by Harry Forbes at 4:34 AM