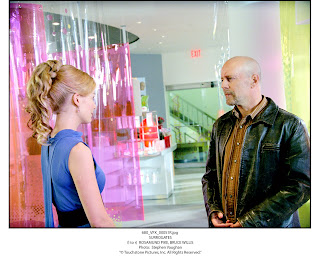 In this sometimes silly and illogical, but overall rather compelling, science fiction thriller, directed by Jonathan Mostow, Bruce Willis plays FBI agent Greer who, together with partner Jennifer Peters (Radha Mitchell), is assigned to solve the mystery of a young man killed outside a Boston disco while canoodling with a blond pick-up.

But this is no ordinary young man and no ordinary Boston. In this world, everyone has a surrogate – a more perfect, youthful version robotic counterpart – while the “owner,” studded with electrodes, sleeps safely at home, brain impulses transmitted to the alter ego.

The victim was, in fact, the surrogate of the scion of crusty billionaire Dr. Lionel Canter (James Cromwell), inventor of the surrogates. Though surrogates can be harmed, their owners cannot. Until now, that is.

Greer discovers the killer Strickland (Jack Noseworthy), wanted for armed robbery, is in possession of a weapon – a so-called “overload device” – capable of killing both surrogate and owner. Complicating Greer’s mission is the Human Coalition, a group of militant opponents of surrogates, led by a bearded Prophet (Ving Rhames.

We first see Greer in his surrogate form, and you’ll get a kick of out Bruce Willis with a blond hairpiece, and his facial lines digitally smoothed out. But when his surrogate is badly mutilated after a violent skirmish, Greer forgoes the surrogate, and it’s Willis, as we know him, for the rest of the film.

He gives a surprisingly solid performance, grief-stricken over the child who died years before, and yearning to connect with his wife Maggie (Rosamund Pike) who deals with that loss by taking refuge in her coldly perfect surrogate. Cromwell gets relatively little screen time – as his wheelchair-bound character usually speaks through his surrogates – but he’s excellent in his one extended scene.

Though special effects dominate – and visual effects supervisor Mark Stetson’s work is quite outstanding here – Greer’s personal dilemma is compelling on its own terms. John Brancato and Michael Ferris’ script was adapted from a graphic novel by Robert Venditti and Brett Weldele.

There’s considerable action violence, with a couple of especially well done slam-bang chase sequences, but little in the way of actual blood.

In our increasingly technological world with its computers and cell phones, not to mention society’s obsession with perfection, “Surrogates” – though hardly profound -- can be viewed as a cautionary story with point.

(Rated PG-13 by the MPAA for intense sequences of violence, disturbing images, language, sexuality and a drug-related scene.) Print this post
Posted by Harry Forbes at 6:15 AM