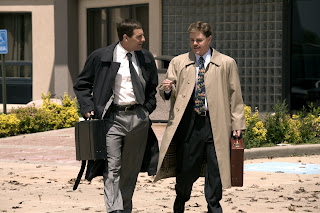 Matt Damon again proves himself a fine character actor in director Steven Soderbergh’s entertaining riff on the man said to be the highest-ranking corporate whistleblower in U.S. history. That was Mark Whitacre, a vice president at Archer Daniels Midland (ADM) who, in the early to mid 90’s, agreed to help the FBI gather evidence of a global price-fixing conspiracy for a food additive called lysine.

First hesitantly, then enthusiastically, playing secret agent for the Bureau, Whitacre – a biochemist in addition to his executive status -- comes to relish packing a wire and a tape recorder, and oh-so-cleverly getting his colleagues and associates to spill the beans about their unscrupulous activities.

Working with FBI Agents Brian Shepard (Scott Bakula) and Bob Herndon (Joel McHale), he naively believes his efforts will ultimately earn him the admiration of his company and almost surely lead to promotion when the wrong-doers are ousted. His sweetly long-suffering wife Ginger (Melanie Lynskey) has her doubts.

And indeed, there’s a twist in store, but even though this is a true story, it would perhaps ruin the fun to reveal it here.

What gives the film its distinctive tone, as well as the comic edge to a basically serious narrative, is the almost non-stop voiceover narration of Whitacre (brilliantly delivered by Damon), as he jabbers on in almost stream-of-consciousness fashion with a cockeyed logic that defies description. The sharp script is by Scott Z. Burns, based on the book of the same name by Kurt Eichenwald.

It’s quite an incredible story – and moored by Damon’s performance, and the handsomely shot international locales (Whitacre traveled the globe in his dealings) beyond his Decatur, Illinois home base – and an absorbing one. The Whitacre home in the film, incidentally, was their actual abode.

The 30 pounds added by Damon for the role, along with other facial alterations, show a worthy readiness to lose himself in character. It’s gratifying to observe this trend is shared by so many of his peers including Ben Affleck, Brad Pitt, Leonardo DiCaprio, The willingness and ability to stretch often with such remarkable dexterity, I think makes today’s stars rank very much on a par with their Golden Age counterparts.

(The film has been rated R by the MPAA for language.) Print this post
Posted by Harry Forbes at 7:05 AM