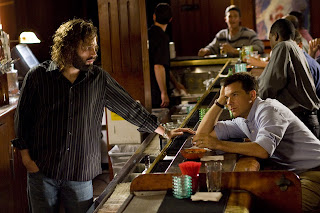 This quirky off-beat comedy from writer-director Mike Judge – originally intended as a follow-up to his cult favorite “Office Space” nearly 10 years ago -- is far from perfect, but its low-keyed shenanigans involving labor and love in a small-town extract factory wins you over with its generally smart humor and some spot-on performances.

Jason Bateman is Joel, founder of the plant he has built into the thriving Reynolds Extracts thriving business. When one of his workers – Step (Clifton Collins, Jr.) – is injured, con artist Cindy (Mila Kunis), who’s drifting through town, sees an opportunity to cash in.

She contrives to take a job at the factory to find out where Step lives. In short order, she’s surreptitiously dating the loser, and cunningly convincing him to sue. If he follows through, of course, Joel will lose the factory.

Joel, whose sexual activity with coupon-designer wife Suzie (Kristen Wiig) has frustratingly diminished, is a decent man but he fantasizes about a fling with the curvaceous Cindy about whose machinations he’s, of course, totally clueless.

His laid-back barkeeper buddy Dean – played by an almost unrecognizably bearded, long-haired Ben Affleck in a droll comic turn – convinces him to hire Brad (Dustin Milligan), a dimwit would-be gigolo to seduce Suzie, which would then ease Joel’s own conscience about moving in on his curvaceous new worker. Under the influence of a tranquilizer from stoner Dean’s pill arsenal, Joel agrees, to his morning-after regret.

Milligan’s one of several amusing supporting performances, which also include David Koechner as an obnoxiously pushy neighbor Nathan, J.K. Simmons as the factory supervisor who never remembers the employees’ names, and Gene Simmons of KISS as a shyster lawyer. But it’s the very appealing Bateman who holds the film solidly together, with Affleck proving a surprisingly deft comic foil.

Though the emphasis here is social satire, “Extract” bears a superficial resemblance to the blue collar milieu of the underrated Renee Zelwegger-Harry Connick, Jr. romance, “New in Town,” with its picturesque working class types, threat of big-city encroachment (here a buyout by General Mills), and even the presence of Simmons.

Not all of Judge’s gags are inspired, and some fall downright flat, but there are enough good bits to make the film worth your time. And underneath some crude language and morally dubious situations, the script shows compassion and decency even where some of the less admirable characters are concerned.

(Rated R by the MPAA for language, sexual references and some drug use.) Print this post
Posted by Harry Forbes at 7:29 AM