The Other Man (Image Entertainment) 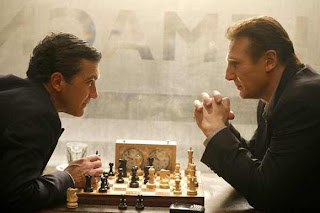 In its essentials, we’ve seen all this before. The devoted husband of a seemingly loving wife learns she’s having an affair and, in a rage, determines to track down the lover.

So here we have Liam Neeson – recently on the trail of his daughter’s abductors in “Taken” in Paris – now hunting a putative lover in Milan. Antonio Banderas – hair sliced back and looking every inch the dapper continental businessman – is his prey. Laura Linney is the errant wife.

With British theater director Richard Eyre at the helm, you begin to wonder why talent of this caliber would take on such a conventional story. Well, the narrative is not entirely what it seems, as things turn out, but by that time, you may not care.

It’s all little consolation for the choppy narrative and overheated passion (mostly courtesy of Neeson) on display here.

Without giving too much away, husband Peter hacks his wife’s email and with the help of a security expert at the office, he identifies the writer of the florid love notes and the subject of a few steamy photos, and takes off to Milan, seemingly with murder in his blood.

But no. Instead, he discovers lover Ralph’s daily routine of chess at a local café, and before long, they’re playing together. Ralph quickly spills the beans about his luscious lover (i.e. Linney), and it’s all Peter can do to contain himself. With every smug “check” and “checkmate” from Ralph, Peter seems closer to going berserk.

Eventually, Peter’s daughter Abigail (Romola Garai) finds further evidence of her mother’s infidelity, and leaves her shaggy husband behind, to join Peter. But when she observes her dad becoming more obsessive by the hour, heedless of her entreaties, she returns to London in disgust.

To say more would spoil what little suspense there is, but suffice to say, the source material – a story by Bernhard Schlink, author of “The Reader” – has resulted in something far more prosaic than that multi-leveled, morally textured work.

Neeson is reasonably compelling in a fairly one-note role, and so is Banderas with his more enigmatic character. Linney is reliable as ever, though she’s more talked about than seen.

All three are worth seeing, but this curiosity is far from their best work.

(Rated R by the MPAA for some sexuality/nudity and language.) Print this post
Posted by Harry Forbes at 9:52 AM