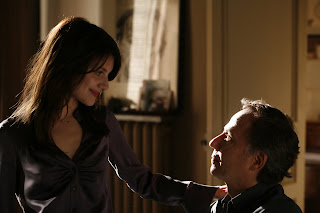 Here’s another of those multiple storyline films so popular these days, though here the connections are rather closer than usual, with a central plot strand -- a dancer from the Moulin Rouge (played by director Cedric Klapisch’s frequent star Romain Duris) waiting for a heart transplant and contemplating mortality, while his social worker sister (Juliette Binoche), a single mom with three children, moves in to care of him -- dominating.

There’s also a history professor at the Sorbonne (Fabrice Luchini) who has a May-December affair with a pretty student (Melanie Laurent who plays the Jewish cinema owner in “Inglourious Basterds”) he’s been virtually stalking through text messages, his architect brother (Francois Cluzet) waits for the birth of his child and worries about his inadequacy.

Other characters include an illegal immigrant from Cameroon (Kingsley Kum Abang), two sisters in the fashion industry (Audrey Marnay and Annelise Hesme), a bakery owner (Karin Viard) never satisfied with her help, and various market stallholders, including a fishmonger (Albert Dupontel) whom Binoche’s character flirts with each day as she makes her rounds.

Though very much a paean to the titular City of Light, this isn’t the glossy Technicolor valentine of the old MGM mode, but a grittier multifaceted Paris – the old landmarks co-existing with the new -- but none the less intriguing for all that.

Klapisch succeeds in capturing the variety of moods that are part of the city’s makeup, and performances are generally fine across the board, but not all the vignettes are golden, and at 124 minutes, the film is somewhat longer than it should be.

(The has been rated R by the MPAA for language and some sexual references.) Print this post
Posted by Harry Forbes at 9:31 AM