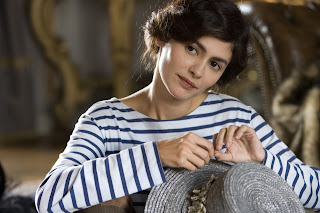 Audrey Tautou is the brilliant centerpiece of this understatedly sumptuous telling of the legendary Gabrielle Chanel’s colorful early life, starting in 1893, when she is an orphaned waif at the Aubazine monastery, poignantly waiting for a father who would never visit.

As she grows, she learns her craft as a seamstress, but finds entertaining at the café-cabarets more to her liking. And it is there she earns her nickname by singing the jaunty ditty “Coco qui a vu Coco.”

Sullen tomboy that she seems, she becomes an unlikely courtesan to a frequenter of the café -- racehorse owner, gentleman farmer, and overall bon vivant Ėtienne Balsan (a superb Benoit Poelvoorde) -- and observes critically his playing host to an idle, decadent crowd.

Their relationship notwithstanding, she finds true love with his pal, Arthur “Boy” Capel (Alessandro Nivola). Their romance blossoms when the paternally indulgent Balsan allows Boy to take her away for a weekend to the shore. But the romance will end tragically.

The film gives us glimpses of Chanel’s burgeoning fashion sense, as for instance, when she advises one of Balsan’s former mistresses, the actress Emilieene (Emmanuelle Devos) – actually, an amalgam of two real-life performers -- not to overdress, showing her bias for simple designs.

The screenplay by Fontaine and Camille Fontaine , with the collaboration of Christopher Hampton, was loosely based on “L’irrégulière” by Edmonde Charles-Roux.

Tautou plays with total conviction: stubborn, headstrong, grave and serious until, that is, she experiences love for the first time. Throughout she conveys an innate conviction about her talent and unconventional worldview.

Tautou’s assured portrayal – and the quality of the production as a whole, sensitively helmed by Anne Fontaine -- makes this the definitive take on the genesis of the iconic fashion designer. Poelvoorde gives the film’s other great performance, his interest in his young protégé morphing touchingly from playful lust to tolerance and genuine love.

Some may be disappointed that the film takes Chanel just to brink of success as a world famous couturier, but they’ll find compensation in a breathtaking fashion sequence on the famous Chanel staircase at the end of the film that is all the more effective for our not having seen all that came before. Tautou, in tight close-up, looks on serenely, no longer an awkward gamin, but confident queen of her domain.

(Rated PG-13 by the MPAA for sexual content and smoking.) Print this post
Posted by Harry Forbes at 4:45 AM