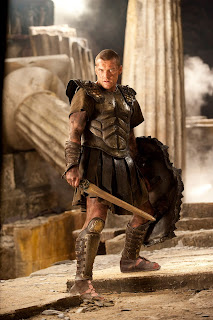 This is an overly frenetic, dark-toned remake of the 1981 cult film about Perseus, the bastard son of Greek God Zeus, who must defeat Zeus’ evil brother Hades who is intent on vanquishing Zeus and controlling earth.

Liam Neeson is Zeus and Ralph Fiennes is Hades, neither exactly chopped liver, but still not in the same class as the original’s starry cast, including Laurence Olivier, Maggie Smith, Claire Bloom, Ursula Andress, Burgess Meredith and the rest.

The special effects of Ray Harryhausen have been replaced by a plethora of CGI and motion capture effects which, in their way, look as artificial, in their way, as Harryhausen’s primitive (by today’s standards) but beloved creations, and not half as much fun.

The presence of Sam Worthington as Perseus (Harry Hamlin’s original role) – looking disconcertingly as he did in “Avatar,” though this time, allowing his native Aussie accent to break through – raises unflattering comparisons to James Cameron's record-breaking film, which was far more artfully designed and executed.

In playing a young man determined to reject his demigod status, and side with the humans, the likable Worthington gives a sincere performance consisting mainly of a determined frown occasionally punctuated by short little laughs.

After his fishermen parents (Pete Postlethwaite and Elizabeth McGovern), who found him as a baby, perish at the hands of the Gods, Perseus joins forces with Draco (Mads Mikkelsen) and his spiritual guide, the beautiful Io (Gemma Atherton), to battle scorpiochs (giant scorpions); half-man, half-monster Calibos (Jason Flemyng); and StygianWitches. Their mission is to destroy Hades’ terrifying creation, the colossal Kraken, before the beautiful princess of Argos (Alexa Davalos) is sacrificed to the sea monster first.

Louis Leterrier directs with a surfeit of fast cutting, and dizzying camera moves that make the action often difficult to follow. The film was shot conventionally, but quickly converted to 3D after the fact to cash in on the current craze for the process, which in this case, adds very little. In fact, I found myself watching without the tinted glasses, and the experience was, by comparison, far more visually pleasing.

The lengthy sequence wherein Perseus must confront Medusa in her lair, and cut off her snake filled head, averting his gaze lest he turn to stone, is reasonably well done, as is the climactic sequence of the Kraken rising from the sea. Perseus’ winged horse, Pegasus, is also well executed. But the overall palette is murky and dreary. In contrast to the more brightly hued original version, Martin Laing’s production design is largely awash in browns and dark colors.

Neeson makes a plausible Zeus, by turns godlike, bellicose, and paternal. And Fiennes has some fun with the duplicitous Hades. Otherwise, performances are only serviceable.

(Rated PG-13 by the MPAA for fantasy action violence, some frightening images and brief sensuality.) Print this post
Posted by Harry Forbes at 5:24 AM