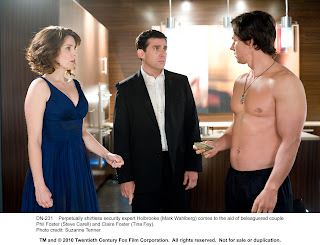 Steve Carell and Tina Fey make an effortlessly likable team in an otherwise labored action-comedy wherein their characters -- Phil and Claire Foster, a New Jersey couple (tax accountant and realtor respectively) -- bored with their suburban routine, get more than they bargained for when they impulsively decide to come into New York for a fancy dinner to reinvigorate their marriage.

When the snooty greeter at the overpriced restaurant informs them the place is fully booked, they take another couple’s reservation, only to learn that said couple – the Tripplehorns -- are being pursued by a mob kingpin’s henchmen, two crooked cops (Common, Jimmi Simpson) who are after the mobster’s stolen flash drive.

Along the way, as they flee the bad guys throughout the streets of Manhattan and try to find the purloined item themselves, they have encounters with the actual thieves (James Franco and Mila Kunis), a crooked district attorney (William Fichtner), and the mobster himself (Ray Liotta).

There are a number of other cameos throughout including Mark Ruffalo and Kristen Wiig as friends of the Fosters who are planning to split after their marriage has fallen into a similar rut.

At one point, the Fosters turn to one of Claire’s former clients, a security expert, played by Mark Wahlberg, who humorously plays all his scenes shirtless (recalling his Marky Mark modeling days). Claire ogles him, while Phil is cowed by Wahlberg’s buff pecs.

Unfortunately, a moderately promising premise is undercut by Josh Klausner's bland script that doesn’t really deliver on laughs, despite Carell and Fey’s seasoned turns, or on suspense, including an elaborate car chase.

The early parts of the film where we observe the couple’s blandly routine life are duller than they need to be, and once the film kicks into action gear, matters are simply too contrived to generate real suspense.

Throughout their adventures, Phil and Claire continue to try to affirm and strengthen their marriage, a sweet concept with some genuinely touching moments, but it's strictly formulaic.

Still, even if the level of wit several notches below their respective series, “The Office” and “30 Rock,” Carell and Fey’s rapport makes for engaging watching. (And it’s worth sitting through the credits to watch how adeptly they improvise during the shooting of several of their scenes.)

(Rated PG-13 by the MPAA for sexual and crude content throughout, language, some violence and a drug reference.) Print this post
Posted by Harry Forbes at 6:05 AM