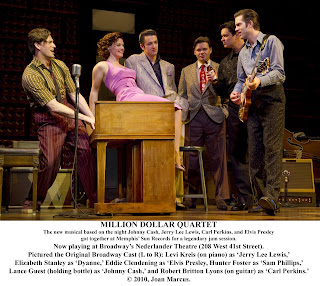 An actual 1956 impromptu jam session with Elvis Presley, Carl Perkins, Johnny Cash, and Jerry Lee Lewis in the storefront studio of Sam Phillips’ Sun Records serves as the not unreasonable foundation for “Million Dollar Quartet,” a show which strives to mix those artists’ iconic hits with something of the serious underpinning of a “Jersey Boys.”

But despite some dramatic conflict, the show – an import from Chicago -- is, at heart, just itching to be a jukebox musical as the fanciful finale confirms. Suddenly Derek McLane’s ramshackle Memphis studio flies away to allow the soon-to-be megastars to perform some of their hits in a full-out concert, and the audience can presumably exit the theater fully satisfied.

The actual session was not, in fact, a greatest-hits compendium, and consisted of a good many hymns which Presley and Lewis knew in common. But here you have “Folsom Prison Blues,” “That’s All Right,” “Sixteen Tons,” “Great Balls of Fire,” and “Hound Dog.”

The plot, has Phillips, played by a non-singing but solid Hunter Foster, overseeing a Carl Perkins (Robert Britton Lyons) recording session. Lewis (Levi Kreis) has just charmed his way into the Sun Records family, and he’s to play keyboard for Perkins. The former’s extroverted playing seriously irks Perkins, but Phillips keeps the peace.

Before long, Presley (Eddie Clendening) and Cash (Lance Guest) drop by, Elvis with a girlfriend Dyanne in tow. She’s played by Elizabeth Stanley from “Cry-Baby” is a fetching pink outift, one of Jane Greenwood’s nice period creations. With a little dramatic license, Dyanne gets to sing a couple of numbers herself.

Presley has already left Phillips for RCA in New York, but Phillips is being wooed by that label himself, where he’d be able to reunite professionally with Presley. Much of the drama (book by Colin Escott and Floyd Mutrix ) involves record deals as, we learn, both Cash and Perkins are entertaining major label offers. Adding a little further tension, Perkins resents Presley for appropriating his hit, “Blue Suede Shoes.”

Of the four leads, Kreis is, by far, the standout, successfully channeling Lewis and quickly becoming the audience favorite. He’s also credited with additional arrangements. Given Perkins' issues, Lyons has the meatiest role (apart from Foster), and does it well. Guest sounds reasonably like the deadpan Cash, though there’s little physical resemblance. (Cash, incidentally, was inaudible on the actual recording.)

Surely with all the Elvis impersonators in the world, a better match might have been found than Clendening, which is not to say that he, like the others, isn’t a fine musician, but a dead ringer for Elvis he’s not.

Eric Schaeffer directs capably, and the audience indeed cheers at curtain time. But this is thin material indeed.