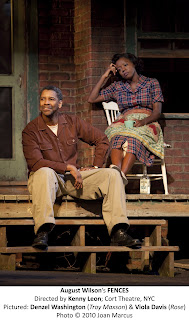 Denzel Washington delivers a tremendously satisfying performance in the role created by James Earl Jones in August Wilson’s 1987 Pulitzer winner “Fences,” considerably redeeming himself after his last Broadway outing playing Brutus in a distinctly mediocre “Julius Caesar.” And on this occasion, he has a spectacularly worthy partner in Viola Davis.

The production, expertly directed by Kenny Leon, with his distinguished track record with the playwright’s work, is outstanding across the board.

Cory hopes to play football, following in his father’s footsteps as Troy once played in the Negro baseball leagues, though as a black man, he could not cross over to the white major leagues, a source of considerable bitterness. We also learn that Troy served a prison sentence years before for a murder in self-defense.

From a previous marriage, Troy has an older son (Russell Hornsby) with musical aspirations. a mentally challenged (after a war injury) brother Gabriel (Mykelti Williamson) who harbors biblical delusions (and is ergo Wilson’s mouthpiece for the play’s more fanciful imagery), and an easy-going friend Bono (Stephen McKinley Henderson) who has known him since they served time in the penitentiary, and who frequently drops by to shoot the breeze with his friend.

Though he has no driver’s license, Troy desperately wants to become a driver at his company, up until then – like major league baseball -- a white man’s prerogative. Troy blocks Cory’s football aspirations, based largely on his own failed baseball career.

Though the basic domestic situation seems amiable enough and Troy and Rose seem to have an ideal relationship, Bone has learned that Troy is spending time with a certain woman from Tallahassee, and – in a beautifully nuanced scene, since Bone doesn't dare voice his suspicions outright -- urges Troy not to hurt Rose. The adulterous situation allows for plenty of conflict, especially in the riveting second act when the full extent of Troy’s infidelity revealed.

Washington radiates all that big screen charisma that was so strangely lacking in his Brutus. His character’s immensely likable traits play right into his fans’ expectations at the start. But as Troy’s very real defects begin to emerge -- and Washington doesn’t try to soften the less pleasant aspects – the audience becomes unabashedly vocal and, Denzel fans or not, they shift their loyalty to Rose.

That’s easy to do, given Davis’s immensely sympathetic portrayal of a loving wife who’s lived just as tough a life as her husband, but who had the strength of character to make the marriage last.

Though some of Wilson’s symbolism – like all the baseball imagery, and the fence which Troy is building around his house to keep out both the changing outside world, and death itself – is a bit obvious, the play still holds up as one of the great American dramas, not far removed from Arthur Miller or William Inge.

Flawed though Troy may be, it is to Wilson’s credit, that as with Willy Loman, you can feel pity and empathy for a man who tried to do his best against powerful odds.