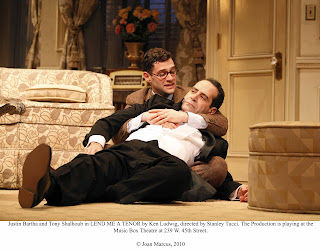 Farce, so popular in Europe and the U.K., has always been a dicey proposition on these shores. But when it’s done right – like “Boeing Boeing” a couple of seasons ago – and the current revival of “Lend Me a Tenor,” the results can be side-splittingly sublime.

Much as Matthew Warchus breathed fresh life into Marc Camoletti’s 1960’s sexy stewardess door slammer, actor Stanley Tucci has performed similar wonders with Ken Ludwig’s Broadway and West End hit, directing with savvy precision. The quality of Ken Ludwig’s work has never been more evident, not just a homage to the genre, but the real deal.

Anthony LaPaglia is a hoot as Tito Merelli, a noted Italian tenor who comes to Cleveland to sing Verdi’s “Otello” for the opera company’s anniversary celebration. Tony Shaloub is his exasperated general manager Saunders who fears Tito won’t arrive in time to rehearse for a performance only six hours later. Justin Bartha from “The Hangover,” in a memorable Broadway debut, is Max, Saunders’ mild-mannered gofer with operatic aspirations himself who goes from quivering insecurity to cocky assurance with appealing vulnerability.

Max’s romantically-minded girlfriend Maggie (Mary Catherine Garrison), a classic ingénue, has a crush on Tito who is married to the hot-blooded Marie (Jan Maxwell, in a gloriously over-the-top performance). Diana (Jennifer Laura Thompson) is the glamorous soprano who hopes that Tito will be able to further her singing career, and Julia (Brooke Adams) is the opera company’s patroness.

The cast is uniformly superb, including a highly amusing turn by Jay Klaitz as an overly eager bellhop, besotted with Tito himself.

When Tito out of commission from too much Phenobarbital, Saunders contrives to have Max take his place. Improbable? You bet, but great fun nonetheless, especially when the two “Titos” – dressed identically as the Moor in black-face – cause mass confusion.

There are many hilarious sequences: Saunders having a fit on the floor, madly spinning a hassock with his feet; Tito giving Max a lesson in limbering up before vocalizing; much mayhem in the bedroom closet and bathroom, including a felicitous use of bubbles in the latter.

But amid all the shenanigans, there are some extremely touching moments, a balance Ludwig and Tucci sustain all evening.

On this occasion, John Lee Beatty’s sumptuous 1934 hotel suite is a period knockout, and Martin Pakledinaz’s costumes eye-poppingly sumptuous, including a stunning green gown for Thompson, and a silver number for Adams. Throughout they delight the eye.

This sparkling revival deserves to surpass the original’s run of 476 performances.