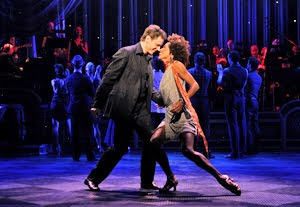 Twyla Tharp’s expansion of her 1982 ballet "Nine Sinatra Songs" makes for an engaging two-hour dance show, and in terms of popular appeal and overall concept is far superior to her less-than-satisfying 2006 Bob Dylan songfest, “The Times They Are A-Changin'.”

Four principal couples dance to over 30 Sinatra standards, most heard in recordings from the Chairman of the Board, but enhanced with a live band. The end result is still synthetic but not unenjoyable once your ears accustom to the artificial acoustic.

To vary the sound palette, a few of the vocals are smoothly handled by the setting’s band singer Hilary Gardner solo or in posthumous duet with Old Blue Eyes. A couple of numbers are purely instrumental.

In the evening cast (matinees have some different principals), a black-outfitted Keith Roberts and an exotic Tina Turner lookalike Karine Plantadit get some of the flashiest numbers including the sensational apache dance Tharp has concocted for “That’s Life.” Plantadit is quite a force of nature and radiates star quality with her uninhibited animalistic stylings.

Tharp’s “Movin’ Out” star John Selya shines in his ruminative solo, “September of My Years,” dancing alone in designer Donald Holder’s spotlight. He’s paired with the likable red-headed gamine Holley Farmer who brings an impish quality to her numbers.

The purely comic relief couple – the bald and impressively gymnastic Charlie Neshyba-Hodges and Laura Mead – function much as their characters would in a 1920’s or 30’s musical. (In fact, their miming of Eddie Cantor’s hit "Makin' Whoopee" is a hoot.)

Alexander Brady has some bright moments, too, starting with “I’ve Got You Under My Skin.” But all are top notch, expert in the unique Tharp style.

Though they all have character names, there is really nothing of consequence in the way of plot, except for some sexy off-again, on-again teasing flirtations with others in the ensemble and some suggestion of temporary conflict.

Inevitably, there is a certain sameness to Tharp’s quirky moves, but the show is generally well paced and varied. Unlike, say, “Burn the Floor” – Broadway’s last exciting dance show -- the second act here doesn’t feel anti-climactic. It kicks off with four of the guys doing a modified strip, and builds, much like one of Sinatra’s own live appearances, to his encore pieces, “My Way” and “New York, New York.”

As this point, James Youmans’ sleek nightclub set has morphed to a starry sky with a gorgeous Sinatra constellation. Katherine Roth’s chic and distinctive costumes help immeasurably in helping us sort out the various dancers throughout the evening..