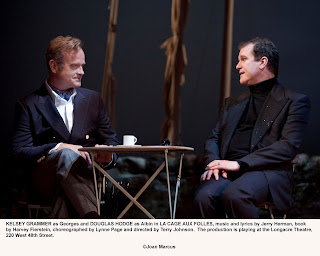 With “A Little Night Music” still going strong, London’s enterprising fringe theater, the Menier Chocolate Factory, presents its second Broadway import of the season: Jerry Herman’s 1983 musical adaptation of Jean Poiret’s durable French stage farce which spawned a memorable film and two sequels, not to mention Mike Nichols’ “The Birdcage.” And, even more so than the Sondheim mounting, this is revival worth importing.

Apart from the many felicitous and clever touches from director Terry Johnson, and an appealing intimacy, the raison d’etre for the transfer is Douglas Hodge’s acclaimed and endearing portrayal of Albin, the flamboyant drag star of a St. Tropez revue.

PBS viewers may remember Hodge as the star of “Middlemarch” on PBS’s “Masterpiece Theatre some years ago. A decade or so ago, I caught him in a memorable production of “The Caretaker” with Michael Gambon. And he made an excellent Nathan Detroit in the fine 2005 “Guys & Dolls” revival with Ewan McGregor and Jane Krakowski which, by all rights, should have transferred to Broadway.

On this occasion, Hodge is wonderfully campy and neurotic, though his interpretation seems a bit more studied than in London. His transformation from dowdy backstage frump to glamorous diva while singing “A Little More Mascara” is wondrous to behold. And when he gets to play it “straight” as a real woman in the second act, he’s better still. Elsewhere, he manages to work in brief but sharp impressions of Dietrich, Piaf, and Monroe.

In London, when the production transferred to the Playhouse West End, he played opposite Denis Lawson (star of the West End “Pal Joey” and “Mr. Cinders”) as Georges, his partner of 20 years and owner of the titular club. Lawson gave a very fine performance.

Here it’s Kelsey Grammer who is wonderfully urbane and sympathetic, and sings the lovely “Song of the Sand” most movingly. (Hodge’s fluttery reactions are priceless here.) They make a superb team, and you can well believe they are a long time couple.

You recall the set-up. Georges’ 24-year-old son Jean-Michel (A.J. Shively) returns home to inform his father he will marry Anne (Elena Shaddow, “Fanny” in the recent Encores mounting), daughter of the Tradition, Family & Morality politico Daudin (Fred Applegate) who is determined to shut down La Cage.

Jean-Michel has invited Anne and her parents for dinner, and wants the flamboyant Albin out of the way, imploring his father to invite his birth mother for the occasion. All gay decorations in the apartment are to be excised. The callow youth is oblivious to the fact that Albin has raised him while the mother has been conspicuously absent.

Farcical complications arise when it is decided to pass off Albin as “Uncle Al,” and he must learn how to act masculine. When the real mother fails to show, Albin impersonates her instead.

Despite the streamlining, the results are far happier than the last Broadway revival five years ago. And paradoxically, I found the reduced orchestrations, stripped-down sets, and smaller cast much less bothersome than the “Night Music” revival, though one would think those elements would matter here.

I was not totally enamored of the club’s strapping Cagelles (only half a dozen or so here), being so plainly masculine, albeit virtuosic. Surely, that concept is out of period. But Lynne Page’s choreography for them is most enjoyable.

Also on the negative side, Robin De Jesus from “In the Heights” as Albin’s “maid,” scores some laughs, but seems utterly wrong with his anachronistic New York Latino patois.

Fred Applegate, another veteran of “Fanny,” plays both the benign café owner and the humorless politico Dindon; Veanne Cox doubles as the wife of both. They’re both excellent, as is Christine Andreas who brings great vivacity to restaurant owner Jacqueline.

The musicians are conducted by Todd Ellison perched in two boxes on either side of the proscenium stage, and in Jason Carr’s orchestral reduction sound flavorfully Gallic.