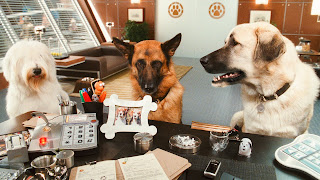 Kids may enjoy the formulaic slapstick and high octane shenanigans, but adults are likely to find this sequel to 2001’s “Cats & Dogs” something of a noisy bore.

This live action, computer animation and puppetry amalgam is, at least, reasonably well executed, though the 3D effects add little. (The continuing popularity of the gimmicky process continues to perplex me.)

The eponymous villainess, a former agent for the spy organization MEOWS -- voiced by a game Bette Midler -- is intent on world domination. Determined to stop her are Diggs (James Marsden), an overly impulsive German Shepherd, formerly of the S.F.P.D., and now with MEOWS’ canine counterpart DOG; an older Anatolian Shepherd Butch (Nick Nolte); and MEOWS operative Catherine (Christina Applegate), a rare case of canine/feline comradeship (and maybe something more).

But Ron J. Friedman and Steve Bencich’s script is serviceable, and mildly amusing, no more. Brad Peyton’s direction is merely competent. The explosions, fights and chases grow wearying, as does the conceit of live animals who can talk, accomplished through the wizardry of CGI.

About three quarters of the way through, the little girl behind me politely informed her adult companion she’d like to leave, demonstrating that even small kids can be remarkably discerning.

(Rated PG by the MPAA for animal action and humor.) Print this post
Posted by Harry Forbes at 5:25 AM