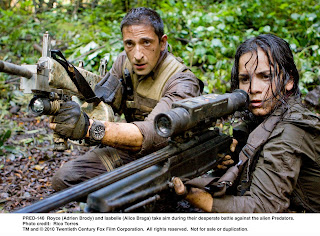 All in all, this is an effective science fiction-action-thriller in which a group of trained killers suddenly find themselves prey to unknown forces on a hostile planet. As the mercenary played by Adrien Brody puts it, at one point, the planet is a “game preserve and we’re the game.”

He and his cohorts, who have all parachuted from the sky into the distinctly unfriendly jungle terrain, have no recollection of how they got there from their respective locations where they lived as convicts, death squad members, army sniper and the like. (The odd man out is the jittery doctor character played by Topher Grace.)

I had not seen the earlier incarnations beginning with 1987’s “Predator” with Arnold Schwarzenegger, but this latest from Robert Rodriguez’s Troublemaker Studios, though flawed, has a lot going for it.

The early parts of the film are the best. During those scenes, Brody and the others, played by Alice Braga, Grace, Danny Trejo, Oleg Taktarov, Mahershalalhashbaz Ali, and Louis Ozawa Changchien, are menaced by unseen forces, and director Nimrod Antal builds up a terrific lather of suspense, starting with Brody’s very nerve-wracking free-fall which opens the film.

Once the warriors realize what it is they’re dealing with – dreadlocked humanoids with infra-red vision, extraordinary strength, and creepy appendages -- the film becomes much too literal, and loses suspense.

The film is well anchored by Brody who – as in his last genre film, “Splice” – gives a solid, believable performance, his distinctively resonant voice adding gravitas to the more spurious lines of dialogue. Braga is also particularly good and the others are well cast.

Midway through, Laurence Fishburne makes a surprise appearance as a hardened survivor of the planet, and makes the most of his limited screen time.

The script had its genesis in an unproduced screenplay Rodriguez penned in 1994, but Alex Litvak & Michael Finch were brought in to update it. It’s generally well constructed and there are some good lines, though it’s often cheapened by the use of far too many expletives.

The film calls to mind the classic Richard Connell story “The Most Dangerous Game” (oft-filmed), where the hunter becomes the hunted. Of course, we’ve seen this sort of survivor story time and again in other guises, too, and it’s often obvious who the next victim will be. When one character says he can’t wait to do lots of cocaine and “rape some fine bitches,” well you know it’s just a matter of time before he gets his.

Fans of the “Predator” franchise and action films in general should like this best, but others will find it atmospheric and suspenseful, the aforementioned caveats notwithstanding.

(The film has been rated R by the MPAA for strong creature violence and gore, and pervasive language.) Print this post
Posted by Harry Forbes at 5:31 AM