The Girl Who Played With Fire (Music Box Films) 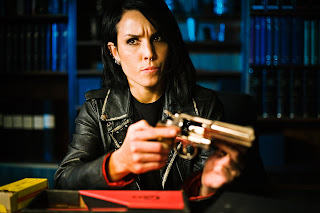 As dark and brooding and ugly as sin as its predecessor, “The Girl with the Dragon Tattoo,” the film version of the late Stieg Larsson’s so-called Millennium Trilogy – tautly directed by Daniel Alfredson this time, makes an equally absorbing thriller.

His publication is about to move forward with a major series on sex trafficking which will reveal involvement by higher-ups in the police force.

Lisbeth is living in seclusion after her actions (which we won’t reveal here) at the conclusion of the first story, and has allowed her gal-pal (and sometime lover) Miriam (Yasmine Garbi) to use her old apartment.

When Dag, the author of the upcoming sex trafficking piece and his girlfriend are found murdered, Lisbeth becomes the prime suspect. Mikael knows she’s innocent, but as she’s not in direct contact, he must use ingenious ways to help her from afar, all the while helping throw the police, headed by Jan Bublanski (Johan Kylen) off her trail.

Meanwhile, Lisbeth’s blackmail of her guardian Nils Bjurman (Peter Adersson) -- who so viciously abused her in the first story – takes another turn when he falls behind in his payments to her.

The bad guys, including a seemingly invincible blond hulk (Mikael Spreitz), in this installment are out of get Lisbeth (and anyone who stands in their way as they pursue her).

As with the first story, twists and revelations abound, including more hair-raising facts about Lisbeth’s background.

Rapace is superb at conveying her character’s neuroses and shrewd determination. As her searching eyes take in the results of her computer scans, she pulls in the viewer to every discovery. Nykqvist projects mature compassion and a dogged if hangdog tenaciousness. The acting is uniformly superb, and much more “real” than standard Hollywood fare.

Jacob Groth’s mood-setting music is as somber and compelling as before. Jonas Frykberg’s script – like Alfredson‘s direction -- is very much consistent with the first film which used a different director and writer.

Something akin to TV’s “Prime Suspect” with Helen Mirren in its unflinching look at the seamy underside, with some strong sexual elements and violence – neither of them gratuitous however -- mixing with a compelling narrative. For American viewers, this is certainly a side of Sweden we rarely see, which adds to its fascination.

“The Girl Who Kicked the Hornet’s Nest,” the film adaptation of the third book, is due to be released in October. And there are English-language remakes of all three in the works as well. But it’s unlikely they’ll top the impact of these authentic adaptations.

In Swedish with English subtitles.

Rated R by the MPAA for brutal violence including a rape, some strong sexual content, nudity and language. Print this post
Posted by Harry Forbes at 7:53 AM