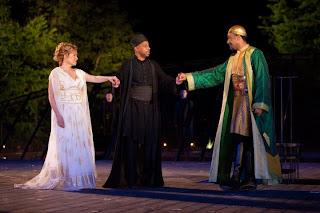 “The Merchant of Venice” – and Al Pacino’s electrifying if idiosyncratic turn as Shylock – may be getting the buzz, but “The Winter’s Tale,” with which it is running in repertory through August 1, is just as fine, and in some respects, perhaps superior.

I don’t quite understand why some critics have been so dismissive of Michael Greif’s very lovely production of the latter, many strangely having the audacity to criticize the play, too. For all its fable-like structure and fanciful elements, “The Winter’s Tale” stands high in Shakespeare’s canon.

In “Merchant,” Daniel Sullivan – faced, like all contemporary directors – with the “Shylock problem” – has added a brutal, enforced baptism for the Jewish moneylender at the end, which seems to me a bit heavy-handed, but he’s also come up with many other felicitous bits of business, like the delightful staging of the casket scenes with Portia’s suitors.

Pacino and Lily Rabe’s playful (and in the courtroom scene, relentless) Portia are indeed excellent, though I found the latter not quite on the level of Lynn Collins in Pacino’s 2004 film, though perhaps that’s an unfair comparison.

But for me, the standout performances at the Delacorte this summer are Marianne Jean-Baptiste and Linda Emond as Paulina and her queen Hermione in “Tale” who are truly splendid.

Ruben Santiago-Hudson’s unreasonably jealous king Leontes who suspects his dutiful wife Hermione of adultery with his best friend Polixenes (Jesse L. Martin) disappoints in the early scenes. Improbable and irrational though Leontes’ suspicion may be – and Shakespeare supplied scant motivation for it in the text – Santiago-Hudson does little to fill in the blanks. But once he realizes his terrible error – his young son and queen both presumably dead – he plays the requisite sorrow and penitence exceedingly well, speaking the text beautifully, too.

And in that last respect, Jean-Baptiste and Emond really shine, the former imploring the wrathful Leontes to accept the infant he refuses to accept as his own, and later Emond passionately declaring her innocence in a fire-lit trial scene.

Most of the supporting cast members double in both plays to impressive effect: Jean-Baptiste, for instance, makes a lovely Nerissa in “Merchant”; Byron Jennings doubles as Camillo and Antonio, Bill Heck as a Sicilian Lord and Lorenzo, Heather Lind as Perdita and Jessica, Max Wright as the Bohemian shepherd who adopts the abandoned Perdita and as the Prince of Aragon

The climactic scene wherein the grieving Leontes is shown a lifelike statue of his late wife, and it comes to life as if by magic is deeply affecting. The characters have moved through the proverbial fire and the return of Hermione to her husband and now grown daughter has, by this point, been truly earned and Greif’s staging and the sensitive playing of all play this beautiful scene to the hilt.

I missed the well-regarded mounting of that play at BAM last year from the Bridge Project, but I’ve seem my share of “Winter’s Tales” here and in London, and none surpassed Greif’s traditional but stylish staging.

In short, both productions are superior Public Theater offerings, but don’t pass up “The Winter’s Tale,” which is every bit as rewarding as its more ballyhooed companion piece.