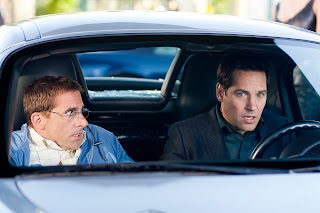 Though Francis Veber’s delightful stage play and 1998 French film – the winner of three Cesar Awards – has been greatly altered, and in many respects, cheapened, the winning performances of Paul Rudd and the ever-amazing Steve Carell make it worth your time.

Director Jay Roach has only used the original property as a springboard for a considerably different sort of affair, utilizing many of the elements in different ways. And the dinner itself, never dramatized in the original, has now become the literal climax.

The setting has been transplanted to Los Angeles. Rudd is Tim Conrad, an up-and-coming financial analyst who’s been invited by his boss (Bruce Greenwood) to attend a dinner in which all the guests must invite the most idiotic person they can find, all for cruel amusement.

Driving through Westwood, Tim nearly runs down Barry (Carell) – an I.R.S. nerd and taxidermist who makes dioramas out of dead mice (don’t worry, they’re cute) – Tim thinks he’s found his perfect candidate to win the prize and make a promotion-deserving impression at the following night’s affair.

Barry mistakes the night of the dinner, however, and shows up at Tim’s house that very evening, thereby proceeding to wreak well-intentioned havoc on Tim’s business affairs and love-life, alienating Tim's girlfriend Julie (Stephanie Szostak).

The mouse element – it was matchstick constructions originally -- is one of the more pleasing additions in this version. The “mouseterpiece” tableaux (everything from the Wright Brothers to Evel Knievel) are really quite charming, and exemplify the sweeter side of the film. David Guion and Michael Handelman’s script has a good number of funny bits, but some of the other permutations on the original’s themes are less felicitous.

Carell at times seems to be channeling Jerry Lewis (speaking of things French); he’s both lovable and irritating in equal measure and Rudd is a winning straight man throughout, his struggle with his better nature nicely portrayed.

So, too, there’s amusing work from Jemaine Clement as an outlandish womanizing artist for whom curator Julie works. He brings something of the roguish spirit of Russell Brand’s character in “Forgetting Sarah Marshall.”

Perhaps in homage to the property’s roots, French actress Stephanie Szostak has been cast as Tim’s disapproving girlfriend, and she’s most appealing and “real.” Zach Galifianakis has some funny bits as a mind-controlling I.R.S. man. And David Walliams and Lucy Davenport are funny and characterful as a German munitions factory owner and his wife whom Tim sets out to impress.

The cruelty of the central premise – albeit finally portrayed as just that – is more disturbing than it was in the original, and somehow, despite Carell’s inspired antics and some amusing gags along the way, manages overall to be far less funny than its source material, never quite hitting its stride. (I saw the play in London several years ago, and found it simply hilarious, played as originally written).

Rated PG-13 by MPAA for sequences of crude and sexual content, some partial nudity and language. Print this post
Posted by Harry Forbes at 7:32 AM