The Kids Are All Right (Focus Features) 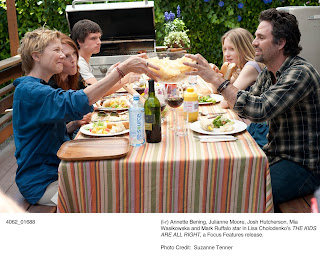 This is one complicated family. Yet, though a far cry from traditional, the emotional dynamic between the spouses – both women, as it happens -- and their children, a college bound daughter (Mia Wasikowka), and 15-year-old son (Josh Hutcherson), are remarkably consistent with any family unit when you come right down to it.

And it says a lot about the impeccable performances here that we can so easily accept such high profile actresses as Annette Bening and Julianne Moore as a long-time lesbian couple, with Bening as Nic, a doctor and the breadwinner of the family; and Moore as Jules an aspiring landscape artist.

As daughter Joni has just turned 18, kid brother Laser, who’s grown up without a male influence, implores her to look up their biological father -- the sperm donor for both of them -- as she is now of age to do so, Their dad turns out to be Paul (Mark Ruffalo), a scruffy, laid back restaurateur and organic farmer who readily grants permission for the kids to get in touch, particularly as he’s kept himself free of any serious emotional ties, and is flattered by the prospect of two ready-made offspring.

After some initial awkwardness, their meeting is a success, and they part with a resolve to continue the relationship. Later, when “the moms,” as they are called, discover what’s happened, they insist on meeting Paul themselves.

Nic is especially wary, but the encounter is cordial, and lunch ends with Paul offering Jules the job of redesigning his property. Predictably if not quite plausibly (but then we wouldn’t have a story), Paul and Jules spark, leading to a situation that could well undermine the family.

The highpoint of the film is a wonderfully acted set piece, wherein Nic – who has been resentful of the others for spending so much time with Paul – agrees to come to dinner at his place and surprisingly, bonds with him over their mutual admiration of Joni Mitchell. But when she retires to the bathroom, she discovers the evidence of Jules’ betrayal. It’s a riveting sequence.

Lisa Cholodenko (who co-wrote the script with Stuart Blumberg) directs in a very unaffected style that marks all the other elements of this distinctive film.

(Rated R by the MPAA for strong sexual content, nudity, language and some teen drug and alcohol use.) Print this post
Posted by Harry Forbes at 4:25 AM