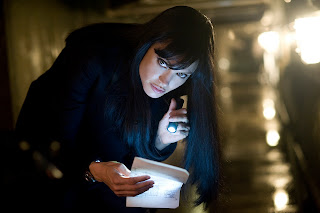 Angelina Jolie confirms her status as supreme female action star in this enormously exciting espionage thriller, “Salt.” In fact, forget the gender qualifier. Whether leaping from bridges onto moving trucks, navigating the precariously narrow ledge of an apartment building, bailing from a helicopter, she does it all as deftly as her male counterparts, and most convincingly at that.

She plays CIA agent Evelyn Salt who, in the film’s tense opening seconds, is being tortured by the North Koreans, insisting all the while that she’s not a spy. Before long, bruised and battered, she’s being swapped for another spy, due to the intense intercession of her devoted researcher boyfriend Michael (August Diehl).

Two years later, she’s in Washington, ready to celebrate her wedding anniversary, and poised to give up these dangerous assignments for a desk job, though her boss Ted Winter (Liev Schreiber) predicts she’ll be bored.

Before she can get home to her hubby and dog, she and Winter are summoned to interrogate a Russian defector (Daniel Olbrychski).

Winter and Peabody (Chiwetel Ejiofor), the agency’s counter-intelligence man
dispatch Salt to the interrogation room, where the grizzled Russian spins an incredible tale about his countrymen training orphaned children to infiltrate America as sleeper agents (Lee Harvey Oswald is cited as one such), in anticipation of Day X where they will spring into action against the United States, seizing control of the country’s atomic weapons.

He reveals that an agent is now poised to kill the Russian president when the latter attends the impending funeral of the U.S. vice president. Salt scoffs at the preposterous story, but as she’s leaving the interrogation room, he stuns both her and the CIA men behind the glass window by naming her as one such operative.

Despite the supportive Winter’s protestations. Peabody has no choice but to detain her. Salt adamantly proclaims her innocence, but fears the Russians will try to target her husband, and determines to him get to him before the Russians at any cost. She ingeniously breaks loose and becomes a fugitive from the Feds as she endeavors to save her husband and clear her name.

As there are many twists and turns, it would be wrong to give away more of the plot, but suffice to say the breathless car and motorcycle chases, daredevil escapes, and ingenious subterfuges never stop.

Throughout all of this, Jolie is fascinating to watch and despite the ambiguity of her character, makes Salt a character for whom you instinctively root, even when the plot threatens to strain credulity. She handles the hardware with the greatest of aplomb, and allegedly does much of her own stunt work. As a blonde, brunette, and even, at one point, audaciously as a man, she captivates.

And with Russian spies currently extremely au courant all over again, the picture’s release could not be timelier.

Director Phillip Noyce whips up a tremendous lather of excitement, and the pace never lags. “Salt” outdoes the Bourne movies for nail-biting excitement. Don’t expect realism, but writer Kurt Wimmer has concocted a hugely enjoyable yarn, grounding his script just enough, all the while keeping you guessing about the motives of the enigmatic Salt character.

The huge funeral sequence – set at St. Bartholomew’s Church on Park Avenue – rivals the climactic Royal Albert Hall assassination attempt of Hitchcock’s “The Man Who Knew Too Much.” Scott Chambliss’ production design and all the location work – mostly in New York and Washington, D.C. – are first rate.

And all the excitement is considerably enhanced by James Newton Howard’s poundingly propulsive score.

(The film has been rated PG-13 by the MPAA for intense sequences of violence and action.) Print this post
Posted by Harry Forbes at 5:55 AM