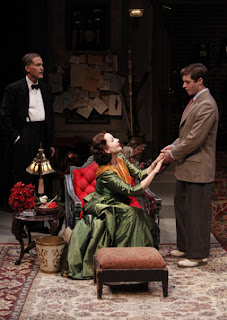 A.R. Gurney’s fanciful valentine to the theater – an expansion of his brief teenage backstage encounter with the celebrated actress Katharine Cornell – provides a most enjoyable showcase for its four players.

The actual encounter – young Pete (Gurney’s nickname) gaining entry to the green room (lovely set by John Arnone), procuring the actress’s autograph after a performance of “Antony and Cleopatra” at the Martin Beck, and sharing a few words with the actress about their mutual hometown of Buffalo – serves as a prologue.

The imaginary version – as in, what if he had lingered longer? – continues with the starry-eyed young man having revelatory conversations with Gertrude Macy, Cornell’s general manager and, as “Time” discreetly put it back then, “her great good friend”; Cornell herself; and finally, Cornell’s husband, the noted director Guthrie McClintic, gay as a proverbial goose who, in one of the funniest scenes, subtly tries to put the moves on the very straight Pete.

Throughout the evening, Cornell frets that she’s not good enough as the Queen of the Nile, that her “grand manner” – so attractive to the older members of the audience – has gotten in the way of her genuine connection with her roles. Director Elia Kazan had told her that she was “too grand” to play Tennessee Williams, an observation that stung.

The versatile Gaines doesn’t play with effeminacy, but goes to town most enjoyably with the theatrical flamboyance of the producer-director. Brenda Wehle is wonderfully tart and likable as the no-nonsense “Gert,” the sort of role in which Eve Arden would have excelled.

Bobby Steggert follows his gay military neophyte role in “Yank!” as another novice – this time to the world of the theater – again framing the play with his narration, more fluidly constructed here.

In fact, Gurney jams a tremendous amount of exposition into his dialogue so we learn of virtually all Cornell’s triumphs such as “The Barretts of Wimpole Street,” “Romeo and Juliet,” “Candida,” “Saint Joan,” and Maugham’s “The Constant Wife.”

That last named happened to be one of Kate Burton’s great stage successes, so here she is playing the lady herself. Apart from Cornell’s TV work including “Barretts,” and her touching cameo in “Stage Door Canteen,” where she recited a few of her Juliet lines to a stage-struck soldier, there’s precious little of her work preserved, so it’s difficult to judge just how accurate is Burton’s portrayal.

Still, the warmth of the “Canteen” scene certainly carries over to Burton’s performance, and she treats Pete in much the same kindly manner. Overall, she gives a charming, vivacious performance (looking wonderful in Ann Hould-Ward’s costumes), her soft, very feminine voice here a special pleasure.

And, in the play’s final moments, when she does a scene from “Antony & Cleopatra” she does seem to summon up the “luminous” quality described so often by critics in Cornell’s day.

Adding to the power of the scene, of course, is Russell H. Champa’s mood-setting lighting, and Mark Lamos’s well judged direction which strikes just the right tone throughout.

Allow me to remark how remarkable it is that Burton has, much like Marion Seldes, after years of toiling as a respected, solidly reliable actress become a truly effervescent one.

We’ll allow Gurney his dramatic license, but surely in 1948 even a tempestuous man of the theater like McClintic would not use the f-word – and other expletives -- as freely as he does here in the presence of ladies, and the truth of the Cornell-McClintic marriage would never be spoken of openly, much less to a kid like Pete. This isn’t David Mamet, such language being merely sporadic, but it is anachronistic.

Cornell, McClintic and Macy are, in fact, lovingly and flatteringly portrayed in this very sweet play, and theater buffs will relish all the references to the era, and marvel at a production which could include Eli Wallach, Maureen Stapleton, and Charlton Heston at the start of their careers.