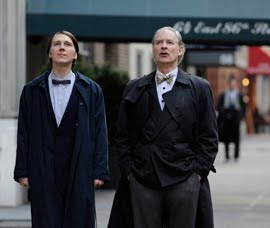 The word quirky might have been invented for this curious comedy about Louis Ives, the young man played by Paul Dano who, after caught in a compromising pose with a woman’s brassiere, is fired from his Princeton prep school teacher job.

He comes to Manhattan where he shares an apartment with eccentric, composition professor and once-promising playwright Henry Harrison (Kevin Kline), an overly refined man with a prudish and fastidious manner who makes much of his professed Catholicism (“somewhere to the right of the Pope,” he boasts) and supplements his income as an “extra man” (i.e., escort) for wealthy widows.

Kline has one of his most colorful screen roles as this autocratic, larger-than-life mentor who shows Louis the ropes on such niceties of how to sneak into the opera. (New Yorkers, note the chosen venue is the City Center, not the Met.)

Dano – so good in “There Will Be Blood” -- is equally fine as his shy, befuddled occasional cross-dressing young protégé through whose eyes we observe the events of the story.

An extremely hirsute red-headed John C. Reilly plays Henry’s oddball friend Gerson speaking disconcertingly in a high-pitched falsetto. At one point, Louis, Henry, and Gershon drive to the beach with the esoteric Henry warbling the title tune of all things, the operetta “Pas Sur La Bouche” (filmed by Alain Resnais a few years ago), and once at the shore, Reilly drops the falsetto and belts out “Somewhere My Love.”

John Pankow is Louis’ boss at the environmental magazine where Louis works in a sales job, Katie Holmes is a bright, likable presence as his vegan office-mate who becomes his unattainable love interest, and this year’s Tony winner Marian Seldes is outstanding as Henry’s most imposing client. A sequence at the Russian Tea Room is a standout.

Co-adapted by Jonathan Ames from his semi-autobiographical novel, originally set in the 1990s, and directed with fable-like aura by Robert Pulcini & Shari Springer Berman (who both shared script duties), capturing something of the spirit of F. Scott Fitzgerald of whom Louis is so enamored. The Gatsby-like sepia credit sequence starts the film off to a charming and promising start.

Still, while the film has its amusing moments, and by the time of the bittersweet wrap-up, manages to tug at the heart, ultimately it never completely captivates, even with its interesting cast which also includes Celia Weston, Patti D’Arbanville, Lynn Cohen, Dan Hedaya, and Jason Butler Harner.

(Rated R by the MPAA for some sexual content.) Print this post
Posted by Harry Forbes at 11:34 AM