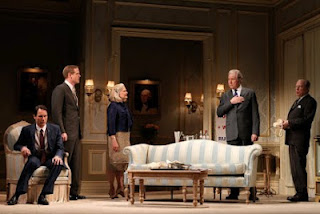 Cantwell is not above mud slinging, especially when he uncovers a mental breakdown in Russell’s past, not to mention a history of serial womanizing. But Russell’s campaign manager (Michael McKean) discovers something potentially more damaging in Cantwell’s past. Will Russell overcome his scruples to use the information to defuse Cantwell’s impending attack?

Therein lays the conflict of Vidal’s play which clearly has amazingly resonant present-day parallels as Cantwell’s loudly proclaimed self-righteousness echoes precisely the rhetoric of so many of today’s right-wing candidates.

Performances are all fine, including Angela Lansbury (sharp as ever) as the Chairman of the Women’s Division, a matronly Candice Bergen as Russell’s unhappy, sardonic wife, Jefferson Mayes as a quivering milquetoast from Cantwell’s past, Corey Brill as Cantwell’s slick campaign manager, and Dakin Matthews as a gregarious senator. Kerry Butler is entertaining as Cantwell’s Southern belle wife, though her accent is marred by an anachronistic Valley Girl intonation.

Derek McLane’s double turntable set allows for speedy transitions between the Russell and Cantwell hotel suites and convention floor, and the colorful campaign banners extending beyond the proscenium and to the boxes. Ann Roth’s period costumes are right on the money. Michael Wilson directs the three-act piece at an engrossing pace.