End of the Rainbow (Belasco) 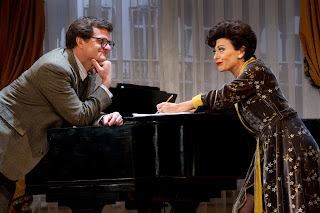 I must confess I found Tracie Bennett’s much ballyhooed impersonation of Judy Garland, as the lady was in those final days in London shortly before her death from a drug overdose, a decidedly mixed bag. For starters, as a Brit, Bennett has the trait, once pervasive among English actors, of failing to pull off a completely accurate American accent. On top of that, Ms. Bennett has not consistently mastered Garland’s distinctive speech patterns.

On the other hand, her body language, particularly in the off-stage scenes, is often right on the money. While her performance - running the gamut from diva-like bossiness to genuine humility to quivering insecurity -- is accomplished, I wanted a more spot-on impersonation.

Vocally, Bennett is sometimes uncanny, but often, not. Her voice has a different natural timbre, and as she lacks Garland’s vocal range – even in her latter days – some of the keys are transposed down. If you’re familiar with the records (including the late bootlegs), you’re going to be disappointed. The play concludes with a rendition of “Over the Rainbow” that almost makes it, but her encore after the curtain calls of “By Myself” misses the tension, not to mention the final soaring notes, that made Garland’s rendition so thrilling.

When famous people are portrayed on stage -- particularly those we know so well from movies and television – they’d better be accurate enough for us to easily suspend disbelief. Tyne Daly captured Maria Callas’ speaking voice brilliantly in "Master Class." Levi Kreis really did conjure Jerry Lee Lewis in “Million Dollar Quartet.” Several years ago, the late Frank Gorshin was George Burns to the life.

Curiously, where Bennett’s impersonation is most oddly off-kilter is in her onstage gestures, There’s ample video of Garland’s stage mannerisms, and some of what Bennett does, just doesn’t jell with the images.

The situation is this: Garland is ensconced in her London hotel room with her fiancée Mickey Deans (Tom Pelphrey) (who would become her fifth and last husband) and her gentle Scottish accompanist Anthony. The latter is played by the wonderful Michael Cumpsty who gives a lovely, understated performance. He disapproves of Deans and, though gay, offers to take her to his home in Brighton for a restful if platonic retirement.

Playwright Peter Quilter portrays Deans as a genuinely loving, if out of his depth young man in the first act, but out of sheer frustration with Garland’s inability to cope without pharmaceutical help, a pill pusher in the second (literally pouring them down her mouth).

It’s not a flattering portrait of Garland (she does a lot of cussing, and is more sexual than you might imagine), but it seems more or less truthful based on the various bios, and both Quilter and Bennett take pains to show the lady's vulnerability.

The play isn't dull, and it's cannily directed by Terry Johnson. The transitions from hotel room to "Talk of the Town" nightclub where she had her final London engagement (William Dudley did the scenic design) are smoothly executed.