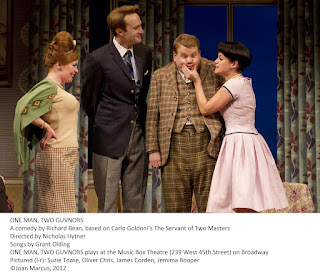 Whatever you do, don’t be put off by the odd sounding, English title. For make no mistake: Richard Bean’s adaptation of Carlo Goldoni’s classic farce, “The Servant of Two Masters” is a laugh riot and, quite simply, the funniest show on Broadway.

Updated to early 1960’s Brighton, we now have Francis Henshall (James Corden in a Tony-worthy performance), a none-too-bright, easily confused, perennially hungry but slyly clever chap who finds himself working for two bosses: Rachel, the twin sister (Jemima Rooper) of murdered thug Roscoe, and her lanky, dim-witted affectedly posh lover Stanley (Oliver Chris) who is still beloved of Rachel, even though it was he who, in fact, killed Roscoe. There’s small-time crook Charlie (Fred Ridgeway) who owed Roscoe money, which Rachel (in disguise as Roscoe) wants to get back, Charlie’s sweet but thick-as-they-come daughter Pauline (Claire Lams) who was engaged to Roscoe (now in the person of Rachel), is hopelessly smitten with Alan, an over-the-top would-be thespian.

The cast is mostly intact from London’s National Theatre of Great Britain. I had seen the NTLive satellite transmission of the show several months ago, and presumed that, by now, a sense of routine might have settled in, but happy to report, this is not so. The show is playing as freshly as ever.

Corden, probably best known for his role as one of “The History Boys” (in Alan Bennett’s play and film) is simply a marvel. This is a comic turn of the first degree. Whether carrying on a heated conversation with himself that escalates into a fist-fight, attempting to serve a wildly frenetic meal to his two bosses while eating most of it himself, imploring the audience for food, impersonating his Irish alter-ego, he is a hoot.

But every single performance here is a gem, including Tom Edden as a Marty Feldman-like deaf waiter with a pacemaker and a bad case of the shakes, and Suzie Toase as a busty 60s-era "bird" who catches Henshall’s fancy.

I had remembered the first act being riotously funny; and the other less so, a sentiment expressed by some critics here. But, upon second viewing, I found the second act chock full of laughs and just as rewarding.

Grant Olding has supplied quite a few snappy songs which serve as, first, curtain raisers, and then scene-changing divertissements. The musicians who open the show call themselves The Craze, a take-off of boy groups of the era, but vocal chores are eventually shared by the other cast members. There are enough songs to fill a cast album (and, indeed, a CD is available), though as the songs are not really integrated, one couldn’t call this a musical.

National Theatre head Nicolas Hytner has directed with an expert sense of fast-paced farce, some of which must be credited to Cal McCrystal billed as the “physical comedy director.”

Mark Thompson’s sets and costumes – bright, cheerful, and eminently suitable for all the farcical business -- make the perfect backdrop for the uproarious slapstick and gags which, happily for your funny bone, never let up.