The Sound of Music (Carnegie Hall) 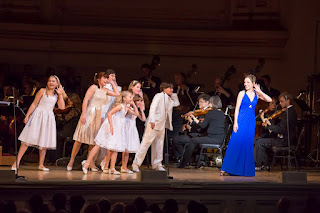 Rodgers & Hammerstein’s extraordinarily popular musical – and their last together – was given a splendiferous semi-staged concert performance at Carnegie Hall on Tuesday night.

Backed by the large forces of the Orchestra of St. Luke’s with the good sisters of postulant Maria’s convent comprised of the Women of the Mansfield University Concert Choir, the cast was led by R&H’s girl of the moment, Laura Osnes, essaying her third major R&H show in New York (the Lincoln Center “South Pacific” and Encores “Pipe Dream” being the first two, and the title role in a Broadway revival of “Cinderella” soon to come), was the irrepressible singing novice, Tony Goldwyn the stern former sea captain Georg von Trapp, the Met’s Stephanie Blythe the Mother Abbess, with Brook Shields and Patrick Page as the Baron’s sophisticated cronies Elsa and Max.

The Stern Auditorium was utilized to the max, with the nuns making their solemn entrance down the aisles holding votive candles with further groupings positioned in the balcony boxes, all producing a heavenly sound. Throughout the evening, panoramic projections on the back wall lent the proceedings a particularly cinematic look, no doubt in homage to the record-breaking Julie Andrews film which clinched the musical’s enduring fame.

Paul Tazewell was credited as costume consultant but the cast’s attire was mostly only suggestive of the period and the characters. Still, Osnes’ lovely blue gown in the first half was hardly the simple frock you’d expect from Maria, but she looked lovely and sang flawlessly in the ingenue – as opposed to seasoned leading lady (e.g. Mary Martin, Julie Andrews)-- mode.

Shields was well cast (and got a big closing hand) as the gold-digging “other woman,” if rather overparted vocally in her two numbers. Page was right on target as the ambitious manager who hopes to get the von Trapp children under contract, despite the Captain’s reservations.

Blythe was an imposing presence, physically and vocally, down to earth in her dialogue, and her “Climb Ev’ry Mountain” was predictably showstopping, even if not quite sustaining the final bars of that soul-stirring anthem.

Nick Spangler gave a satisfyingly firm account of “Sixteen Going on Seventeen” and his dance with Mary Michael Patterson’s Liesl was quite charming. It was good to hear the original dance music, different from that used in the film. Joshua Bergasse supplied the nice choreography including a particularly sweet Laendler for Maria and the Captain.

There were a few significant cameos. Daniel Truhitte, Rolf from the movie, played Baron Elberfeld. And three of the movie children – Nicholas Hammond, Kym Karath, and Heather Menzies – were on hand for the Salzburg scene

“The Sound of Music,” hit though it was, is always considered something of a poor relation to the classics “Oklahoma,” “Carousel,” “South Pacific” and “The King and I,” and yet as stage revivals (Rebecca Luker on Broadway, Petula Clark and Connie Fisher in London) have demonstrated, the piece is solidly constructed (thanks to Howard Lindsay and Russel Crouse’s book), and contains one of the team’s most appealing scores.

Rodgers’ liturgical music – the lengthy and somber opening, the wedding Processional – is quite magnificent, and the story tugs at the heart. The score as heard Tuesday was essentially the stage version, which seemed to puzzle some in the audience, weaned on the movie. Thus “My Favorite Things” was a duet for Maria and Mother Abbess (affording Blythe a nice light moment), “The Lonely Goatherd” came during the thunderstorm, and “Do-Re-Mi,” mere moments after Maria is introduced to the children. The duet for Maria and the Captain used was the movie’s “Something Good,” as “An Ordinary Couple” would have been redundant.

Rob Fisher conducted grandly starting with the overture (lifted from the film, as the original had none) right through the last lump-in-throat notes of “Climb Ev’ry Mountain.”