The Mikado (The Collegiate Chorale) 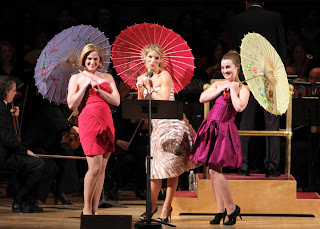 This concert version of Gilbert & Sullivan’s most famous work – under the auspices of the Collegiate Chorale – and with a cast of seasoned Broadway performers was, from start to finish, pure delight at Carnegie Hall last Tuesday.

Ted Sperling’s conducting of the American Symphony Orchestra for the Chorale’s Spring Benefit was vibrant and alert, doing full justice to Arthur Sullivan’s evergreen score. The Chorale – larger, of course, than any stage chorus would be for the work – sounded marvelous, Gilbert’s lyrics crisply articulated. (The group is in the midst of its 70th season.)

The cast had the style down to their fingertips, beginning with Jason Danieley whose strong tenor in Nanki-Poo’s “A Wandering Minstrel” signaled right from the start that the piece would be in accomplished hands (despite momentarily losing his place in that number). Jonathan Freeman was a just about perfect Pooh-Bah in a very traditional vein, and the only cast member to use an English accent, a decision which made sense, given the character’s pomposity. Christopher Fitzgerald was a stitch as Ko-Ko, his list song almost entirely comprised of topical lyrics. The casting of Chuck Cooper as The Mikado seemed a homage to 1939 Broadway's "The Swing Mikado" and "The Hot Mikado" but was as traditional a Mikado as you could wish, until he briefly lapsed into black dialect for the line “Bless my heart, my son!” and promptly brought down the house.

As for the women, Kelli O’Hara sang gorgeously in her soprano register, her “The sun whose rays are all ablaze” particularly ravishing. And though Victoria Clark doesn’t really have the contralto tones required for that gorgon of a man-hunter, Katisha, she offered a formidable and hilarious portrayal. She and Fitzgerald had great chemistry particularly in their duet “There is Beauty in the Bellow of the Blast," a real showstopper. Lauren Worsham made an outstanding, simply adorable Pitti-Sing, and Amy Justman a funny, archly acerbic Peep Bo.

The occasional pitch problem or muffed lyric counted not a whit.

Sperling‘s staging was delightful. There was nothing overtly Japanese about the costuming, but as Jonathan Miller’s 1920s production at New York City Opera and others have already demonstrated, the satire of “The Mikado” is highly adaptable. But the whole enterprise had a Broadway sensibility that – while remaining totally faithful to the source material (Ko-Ko’s song excepted) – gave everything a freshly minted feel.

Much as when the English National Opera performed “Patience” at the Met years ago, it was thrilling to hear Sullivan’s score played so superbly in the hallowed Hall.

The Collegiate Chorale’s season concludes on May 21st with a program comprised of Copland, Poulenc, and Avner Dorman at St. Batholomew’s Church. But here’s hoping there’s more G&S in the group’s future!