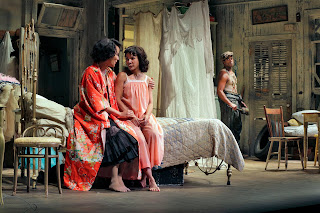 In case you were wondering about the credibility of this latest revival of Tennessee Williams’ classic – in light of the ostensible gimmick of its multi-racial casting – have no fear. This is a sound “Streetcar” in every way, with Nicole Ari Parker a first-rate Blanche DuBois.

In fact, the cast is uniformly excellent. Daphne Rubin-Vega is a feisty but loving Stella; Wood Harris a shyly appealing Mitch; and Blair Underwood a strong, brutish Stanley, if not always finding the humor mined so memorably by Brando and others.

That didn’t stop the mostly black audience at my performance from finding most of Stanley’s harsh put-downs of Blanche’s pretensions -- and even his terrible assault on her in the second act -- hilariously funny. Blanche’s sly flirtatiousness and predilection for drinking also brought howls of knowing laughter. The sadness and pathos of her condition seemed to fly over the heads of many in an audience which might as well have been watching a sitcom taping.

I must stress that none of this was the fault of the performers who did their professional best to keep squarely on course despite these inappropriate intrusions.

The smaller parts are well played, too, including upstairs neighbors Eunice (Amelia Campbell) and Steve (Matthew Saldivar), and Aaron Clifton Moten as the delivery boy who shares a delicate moment with Blanche.

Eugene Lee’s set is suitably atmospheric if less elaborate than say, the Roundabout revival with Natasha Richardson, but more so than the terrific if visually stark Cate Blanchett Aussie import that played BAM a couple of years ago.

Director Emily Mann and her cast – good as they are – don’t quite scale the heights of that brilliant production, or illuminate the play in as revelatory a way, but this still rates fairly high on the roster of New York “Streetcar” revivals.

And, at the end of the day, if a briefly shirtless Blair Underwood succeeds in bringing a new audience to Williams and the theater in general, well, bravo.