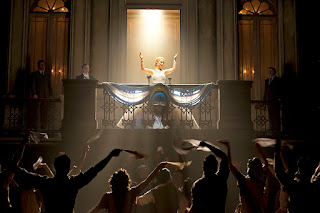 It seems to take London productions longer and longer to cross the pond. I thought the revival of Schiller’s “Mary Stuart” on Broadway after a four year lag from the West End broke some kind of record. But it’s taken the Andrew Lloyd Webber-Tim Rice classic a full six years to make the transition with its star Elena Roger and creative team intact.

In London, I admired Michael Grandage’s production very much indeed – ditto, its star – without being quite over the moon about it as I was after seeing the original production there way back when. In fact, much as Patti LuPone’s name has been admiringly dropped in reviews of the present revival, it is Elaine Paige who will ever remain the champ in my memory. She was simply stunning vocally and dramatically, and contributed greatly to making that original production a very hot ticket indeed. It was only Actors Equity restrictions that prevented her from recreating the role here.

Roger is, like the ambitious Eva Peron she portrays, Argentinean, and thus brings to the table a unique authenticity. She is also a very fine actress, accomplished dancer, and artful – if not powerful – singer. One must approach her performance much as, I would imagine, audiences in the 1930s might have responded to some heralded European star like, say, France’s Yvonne Printemps, not quite in the Broadway mold.

Her voice thins out on top, and some of the showstopping moments of “A New Argentina” and “Rainbow High” are, as a result, less than thrilling. But in every other respect, she completely inhabits the role, and gives a finely detailed performance, particularly in the second act, where she limns Eva’s health decline most movingly.

She is superbly partnered here by Michael Cerveris who, as Juan Peron gives a surprisingly textured portrayal for such a sketchily written sung-through role. There’s as much nuance here as in his Sweeney Todd, to cite one of his outstanding characterizations.

Some have found Ricky Martin lacking in the bitingly sardonic quality that Mandy Patinkin brought to the role of Che. But Martin’s charming cynical take on the part is equally valid, the part itself having morphed from being a Che Guevara prototype to simply a narrator named Che. His is a disciplined, well sung performance and his gracefully athletic movement matches his accomplished vocals, his dancing especially impressive in the “Waltz for Eva and Che.”

Rob Ashford’s choreography is stunning, starting with the “Buenos Aires” number which builds and builds with Roger the impressive centerpiece. But this production is packed with dancing, all of it top-notch.

Hal Prince’s original staging was, one might have thought, definitive, but Grandage’s completely different take against Christopher Oram’s gorgeous realistic sets, is just as satisfying. The big “Don’t Cry For Me Argentina” number is beautifully staged, as Eva comes out on her balcony against the golden glow of a chandelier bedecked chamber behind her, and sings pointedly to the adoring crowd -- frozen in tableau -- below. At this moment and the other "public" moments of the show, Roger seems uncannily like her subject.

And for all the sophistication of Lloyd Webber's latter-day shows, Grandage's production proves that the energy and vitality of "Evita" are as potent as ever.