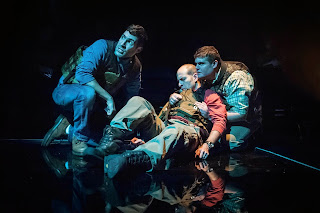 James Dickey’s action-packed 1970 novel – the basis of John Boorman’s memorable 1972 film – would, on the face of it, seem virtually impossible to bring to stage, much less at 59E59’s compact black box theater space, but by golly, the Godlight Theatre Company has mounted a most ingenious adaptation by Sean Tyler.

With a cast of only seven, dramatic lighting (Maruti Evans), sound effects music cues (Ien Denio), and lots of stage fog – which envelopes the audience as much as the actors – suspension of disbelief is far more possible than might be imagined. And this 90-minute, intermissionless dramatization packs a good deal of atmosphere, suspense, and excitement, as tautly paced by director Joe Tantalo.

This is the story of four urban businessmen in Georgia who, persuaded by the outdoorsy Lewis (Gregory Konow), agree to put their dull, routine jobs aside to take on the raging river in the northern wilderness and find themselves on a nightmarish canoeing trip in treacherous waters, encountering some fairly creepy hillbillies along the way.

It helps that the actors are as good as they are. Nick Paglino in Jon Voigt’s movie role has the lion’s share of dialogue (as Ed is the narrator of the book) – articulating his inner thoughts and anxieties, which only occasionally -- as in a climactic scene where he scales a cliff in pursuit of a bad guy -- veer towards too much weighty exposition.

As for the neophytes on the trip, there are the excellent Jarrod Zayas in the Ned Beatty role Bobby (and yes, the infamous rape scene is here), and Sean Tant as the bespectacled conscience of the group, Drew.

Jason Bragg Stanley, Bryce Hodgson, and Eddie Dunn expertly play an assortment of mountain men whom the quartet encounter on their dubious adventure.

The action sequences are neatly done, be it paddling down the river, being thrown into the raging river by an overturned canoe, climbing treacherous rocks, or whatever. Such is the power of theater and good storytelling.