On the Town (Lyric Theatre) 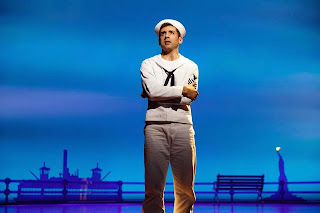 Somehow the prospect of a big Broadway revival of “On the Town” – classic though that 1944 Leonard Bernstein/Comden & Green musical most certainly is – seemed a misbegotten project.

Great for musical buffs, sure. But would it really draw the crowds, especially in a barn of a theater like the Lyric (formerly the Foxwoods and Hilton Theatres, and Ford Center for the Performing Arts)?

Well, I wasn’t reckoning on the lavishness of the production, the freshness of director John Rando’s staging, the creative team’s exceedingly clever approach, the excellence of this cast, or the overall integrity of the project. They have been true to the original – with a super complete score – but it's all been given a wonderfully new coat of paint.

The Encores 2008 revival – also directed by Rando, with the current production’s excellent lead Tony Yazbeck – had plenty going for it, but could not be, of course, the full-out production this is. With vivid colored drops and lighting, this is a cartoon 40s, but unlike the misbegotten 2009 “Guys and Dolls” revival which utilized the same sort of bold color scheme and an overall more contemporary look, but unlike that one, “On the Town” really clicks in all departments.

Yazbeck’s dancing is simply terrific, and his renditions of “Lonely Town” and “Lucky to Be Me” fervent and heartfelt. Jay Armstrong Johnson is the ideal Chip, the wide-eyed innocent who wants to see all the New York sites he's heard about from his father, but are now gone. And Clyde Alves is a delight as the manic Ozzie who meets his match in Elizabeth Stanley’s man-hungry anthropologist Claire. (All three of the men starred in Rando’s acclaimed Barrington Stage Company production from which this production sprang.)

Their “Carried Away” number in the Natural History Museum rivals creators Betty Comden and Adolph Green for zany goofiness. As lusty taxi driver Hildy, Alysha Umphress scored all the expected laughs and then some, and “I Can Cook Too” – done to death by so many – was, like every aspect of this production, freshly minted.

Phillip Boykin sang the opening “I Feel I’m Not Out of Bed Yet” for all it was worth, milking every drop of meaning from the words.

Beowulf Boritt’s snazzy scenic and projection design give the show significant visual pizzazz. It seems more an homage to the 1940s than the real thing, but what a visual feast! And the same goes for Jess Goldstein’s costumes and Jason Lyons’ gorgeous lighting design.

I’m not sure if by 1944 standards, or the tenor of the script, that two of the three couples should so obviously end up in the sack. And some of the production’s flashiness perhaps undercut the sentiment. “Some Other Time,” for instance, was beautifully sung, but the ache of the parting didn’t seem as moving as other productions, or even the 1949 film which beautifully captured the spirit of the original even if it left out most of Bernstein except for three songs and the ballet music.

But those are quibbles. With any luck, theatergoers who recognize Bernstein’s name from “West Side Story” or know “New York, New York, it’s a helluva town” will keep the gigantic Lyric as full – and happy -- as it was on my press performance.