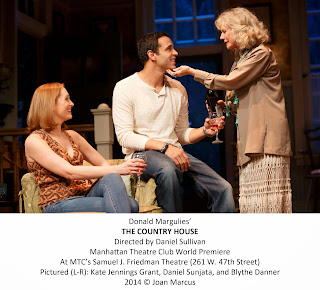 Now it must be said that any play that brings back the wonderful Blythe Danner to the boards gets brownie points right from the get-go. And, of course, a new play by Pulitzer Prize-winning playwright Donald Margulies can’t help but raise pleasant expectations. But, sorry to say, this modern-day Chekhovian story of a theatrical family reunion at their summer place in the Berkshires where Danner’s character Anna, a renowned stage actress, in about to star in “Mrs. Warren’s Profession,” is a mediocre letdown.

Her housemates include her precocious granddaughter Susie (Sarah Steele), her late daughter’s husband Walter (David Rasche), his new girlfriend Nell (Kate Jennings Grant), her sadsack son Elliot (Eric Lange), and a hunky outsider, matinee idol Michael who, as a youth, played Marchbanks to Anna’s Candida. All but disdainful Susie are actors, as was Susie’s late mother, a movie star who has recently died of cancer.

John Lee Beatty’s airy, comfy living room set and the bright, if not especially inspired, banter that makes up most of the first act seem to suggest a breezy comedy with all the women attracted to one degree or another to Michael whose womanizing is the stuff of tabloids.

The first act, in fact, ends quite farcically, but the second bogs down with more weighty matters, starting with a family reading of Elliot’s dismal virgin effort as a playwright. Thereafter, escalating tensions between Susie’s Uncle Elliot (read “Vanya”) and brother-in-law Walter whom the former accuses of selling out as a Hollywood director of schlocky films after a promising stage career (some lively art vs. commerce debate here), and between Susie and Nell whose motives for pairing with Walter Susie finds suspect, dominate. The play’s climactic scene involves a mawkish and self-indulgent revelation from Elliot that, as a child, he didn’t get enough love from his busy mother.

There’s more than an air of contrivance throughout, the dialogue seems derivative of other, better works, and none of these characters really ring true.

Danner looks lovely as ever – squint and she might still be the beguiling Tracy in the Vivian Beaumont revival of “The Philadelphia Story” decades ago – but her character, as written, doesn’t afford many genuine opportunities for either charm or over-the-top grandiosity.

Sunjata is fine, but his character is fairly one-dimensional. Young Steele gets a hand at the end for her wisecracking turn, but the predictably sarcastic comments with which Margulies has peppered Susie’s dialogue grow as tiresome as Uncle Elliot’s poor-me kvetching. Rasche and the lovely Grant come off best, by dint of their measured performances and relatively sympathetic characters.

Not a bad evening out, by any means – the solid cast, many of Margulies’ piquant observations on the current state of the theater, the classy production values (including Rita Ryack’s costumes and Peter Kaczorowski’s lighting), and veteran Daniel Sullivan’s direction are decent enough compensations for the flaws --- but it could have been so much better.