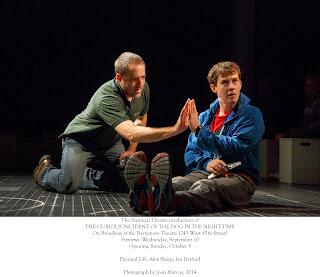 Simon Stephens’ adaptation of Mark Haddon’s 2003 book, as directed by the great Marianne Elliott and performed by a simply splendid cast, is quite simply a towering theatrical achievement.

The tale of a 15-year-old autistic math genius, living with his father after his mother’s death, who compulsively sets out to find the culprit who killed his neighbor’s dog and, later, runs away from home making his way to London on the railroad and then the Underground is wondrously staged, and most movingly acted.

An air of sadness pervades the evening, though, as we watch young Christopher try to comprehend an utterly confusing world, and we are made to feel acutely the poignant ache of the adult characters who love and care for him, and long to break through his mental barriers, even as the boy can’t abide being touched.

Christopher’s second act train journey is framed with bravura effects that represent the very best of modern-day stagecraft. But even the domestic scenes – at Christopher’s home, school and elsewhere – are equally clever, but never showy just for their own sakes, as when Christopher’s discovery of a stash of letters which confuses his uncomprehending mind culminates in a nightmarish cascade of letters raining down on him.

The play started out at Britain’s National Theatre, which even in last year’s NT Live transmission, registered powerfully. In person, though, the impact is far greater.

The American cast (though you’d never know it from the splendid British accents) is headed by the extraordinary Alex Sharp (a recent Juilliard graduate), Ian Barford as his father and Enid Graham as the mother (both moving beyond measure), and Francesca Faridany as his empathetic counselor Siobhan (who sometimes supplies the voice of Chris as she reads from his diary on the sidelines).

There are also the excellent Helen Carey as a sympathetic neighbor who tries to connect with him, Mercedes Herrero as both Mrs. Shears, the owner of the titular dog, and a bureaucratic teacher, and Richard Hollis as both Mr. Shears and, like the rest of the cast, myriad other roles in a stunning ensemble. All of them, at times, move as one thanks to Scott Graham and Steven Hoggett’s inventive choreography.

My only quibble is a questionable play-within-a-play device in the second act, which threatens to undermine emotional involvement, but I found that to be only a momentary distraction and was soon caught up in the main storyline once again.

If ever pressed to come up with a title for “best theatrical experience,” my knee-jerk answer, for several years, has been Elliot’s staging of “War Horse.” Her latest is destined to rank high in my mental theatrical ledger book, too. Don’t miss it.