You Can’t Take It With You (Longacre Theatre) 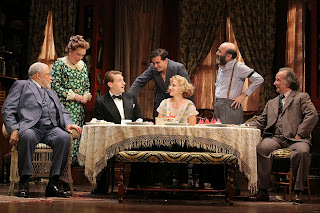 If last season’s Moss Hart bio “Act One” whetted your appetite for one of those classic and uproarious Moss Hart and George S. Kaufman comedies, here’s your chance for almost instant gratification: an altogether delightful revival of their 1936 Pulitzer Prize -winning play about the endearingly eccentric Sycamore family.

Expertly directly by Scott Ellis on a convincingly lived-in and cluttered living room set by David Rockwell, it’s been beautifully cast with Rose Byrne as the least eccentric (but still slightly off-center) daughter Alice, Annaleigh Ashford (that delicious scene stealer from “Kinky Boots”) as a talentless would-be Pavlova, Will Brill as her Trotsky-loving printer-xylophone-playing husband Ed, Mark Linn-Baker as the fireworks-making father, Patrick Kerr as his wacky sidekick, Kristine Nielsen as dotty mother Penelope, Reg Rogers as a gloomy Russian ballet instructor, and Julie Halston as a hopelessly alcoholic actress. Crystal Dickinson is a cheery presence as the right-in-step cook Rheba, and so is Marc Damon Johnson as her permanently on-the-dole beau Donald.

Far more colorful and flavorsome than the 1983 revival with Jason Robards (at least going by the televised version), every character here is given their proper comic due, and there’s far more of a sense of period. Besides Rockwell’s detailed set, there are Jane Greenwood’s spiffy period costumes, Donald Holder’s warm lighting, and Jason Robert Brown’s 1930s evoking score.

The centerpiece of the play – and this production’s highpoint – is the second act appearance of Alice’s fiancé Tony (Fran Kranz) and his well-to-do parents (Byron Jennings and Johanna Day), one day earlier than the dinner date expected. The scene really scores with Penny’s desperate suggestion that they all play a word association game while awaiting the arrival of foodstuffs for dinner (hot dogs or canned salmon).

Among many marvelous scenes there’s Halston’s long unsteady climb up a staircase while reciting an off-color limerick, and the arrival of the Russian émigré Countess Olga (now a waitress at Child’s), and her game offer to take over the kitchen and make blintzes. (That’s the great Elizabeth Ashley, no less, in a grand third act cameo.)

For all the laughs, which are pretty much non-stop, the show has great heart, which explains its durable appeal. And bravo to Ellis, in an age when, to paraphrase Fitzgerald, there are no more third acts in contemporary theater, for retaining the original three-act structure.