Gypsies and Barons and Heirs (Light Opera of New York) 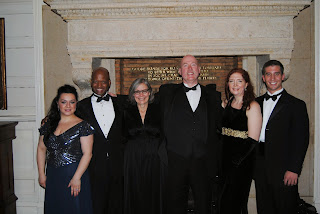 The title of this flavorsome concert mounted by LOONY on a seriously rainy Wednesday at the fabled Players Club was impishly meant to echo the rhythm of “The Wizard of Oz” refrain “lions and tigers and bears…oh my!”

But as accomplished musical director Elizabeth Hastings sheepishly admitted, it might well have been called “Lotsa Lehar” for, indeed, there was. Apart from the occasional Strauss and Kalman piece, the selections were pretty much all by that king of operetta’s Silver Age, Franz Lehar, even though the subtitle “The Merry Widow’s Cousins” seemed to suggest we might get to hear some bits of Oscar Straus (whose “Waltz Dream” was the closest challenger to the Widow’s early 20th century supremacy) or Leo Fall (“The Dollar Princess”).

Soprano Narine Ojakhyan won the vocal palm of the evening, by far, with superbly vocalized accounts of the heroine’s famous numbers from “Paganini” and “Zarewitsch” and the inevitable “Meine Lippen sie kussen so heiss” from “Giuditta” (with castanets, no less). She is a real find, and it was a treat to hear her.

Tenor Byron Singleton had most of the heavy-duty Tauber numbers, and performed them capably and with fervor, and best when he held back a tad. His second act “Wolgolied” from “Zarewitsch” was the highlight, and he lightened up most agreeably in the delightful kissing duet (with Ojakhyan) from the same work performed half in German and half in English.

Soprano Charlotte Detrick bravely essayed Countess Maritza’s strenuous opening aria from Emmerich Kalman’s masterwork, but in the lighter numbers which followed, she demonstrated her charm and comic timing, as did her partner in several of those numbers, tenor Carter Lynch, who also earned especially warm applause for his mellow but feeling delivery of “Vienna Mine” from “Countess Maritza.”

Bass baritone C. David Morrow opened with the dramatic “Riff Song” from Romberg’s “The Desert Song” but like Detrick, came into his own with the lighter numbers. In fact, the two of them (joined by Lynch) closed the first half with a lively slap-dance to “Nut-Brown Maiden from the Prairie” from “Maritza.” (Corin Hollifield directed and choreographed.)

There was a welcome rarity from composer Paul Abraham near the end: the jazzy “Oh, Mister Brown” from “Ball im Savoy” stylishly delivered by Detrick and Morrow. And the concert concluded with “Slow Fox-Trot with Mary” from Kalman’s “Duchess from Chicago,” another nicely unhackneyed choice.