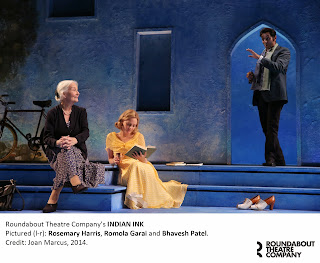 This 1995 Tom Stoppard work – based on his 1991 radio drama, “In the Native State” – is one of his most accessible, and its belated New York premiere here is a good one, featuring, as it does, two standout performances in its female leads: the great Rosemary Harris and, in her New York debut, Romola Garai.

The latter is Flora Crewe, a fictional 1930s poet, who has come to India for her failing health, and Harris is her younger sister Eleanor whom we see years later in the 1980s assisting one Eldon Pike (Neal Huff), who’s compiling her sister’s letters (having already edited a collection of her poems), piece together details of Flora’s life – Modigliani, H.G. Wells, and G.B. Shaw were in her circle – all those years earlier. Eleanor also helps Anish Das (Bhavesh Patel) learn more of the romantic relationship his painter father Nirad (Firdous Bamji) had with Flora long ago.

Harris is sublime as always, and Garai makes a lovely heroine, though Stoppard’s writing never quite convinced me she was a great literary figure. Still, more important to Stoppard’s purpose, beyond dramatizing the cultural clash inherent in India, is exploring what exactly we can know of the past from relatively scant clues such letters, paintings, and other keepsakes, and as the action shuttles back and forth between time periods, we learn that these mementos don’t always truly reflect the facts.

I saw the original production at London’s Aldwych Theatre back in 1995, which was, I think, more definitive directed by frequent Stoppard collaborator Peter Wood, as it was. The great Margaret Tyzack played Eleanor, but the original Flora, Felicity Kendal, had already left the cast and the part was played by the excellent Niamh Cusack.

Those of the ladies excepted, some of the British accents here are a little dodgy. But performances are generally fine across the board including Bamji, Patel, Huff, Nick Choksi, Omar Maskati, and Lee Aaron Rosen.

Fans of theater and Stoppard, particularly those who haven't yet experienced the play, would do well to catch this classy mounting during its limited run.