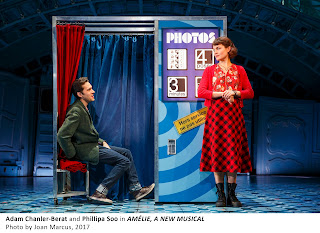 This whimsical little musical based on the equally whimsical but, I’m sorry to say, rather more artful 2001 French film from director Jean-Pierre Jeunet, is at best a pleasant diversion, but at the end of the day, very mild entertainment indeed.

“Amélie” tells the peculiar tale of a young woman brought up by her distant doctor father (Manoel Felciano) who lacks the capacity to give her physical affection, and shelters her because of a presumed heart condition. By the time she grows up and becomes a waitress at the Cafe des Deux Moulins, she has become an anonymous do-gooder (inspired, in part, by the good works of Princess Diana!), helping people connect with one another in a way that she herself is psychologically blocked from doing. When she finds a scrapbook filled with pictures discarded from photo booth strips, she recognizes a kindred soul in its creator Nino,who works as a clerk in a porn shop (of all places). She can’t bring herself to return the book openly, so she engages in a cat and mouse communication with him.

On the plus side, Craig Lucas has adapted the movie’s screenplay with intelligence, ace director Pam MacKinnon directs with requisite sensitivity, and star Phillipa Soo makes her tiresomely shy heroine as appealing as possible.. In fact, all the cast members are solid, including Adam Chanler-Berat as the equally phobic object of her affections, Tony Sheldon as her wise artist neighbor, and David Andino, Randy Blair, Heath Calvert, Alison Cimmet, Harriett D. Fox, Alyse Alan Louis, and Paul Whitty, in various multiple roles, with Maria Christina Oliveras as Gina, one of the cafe denizens, and Savvy Crawford as the young Amélie.

Daniel Messé’s score (lyrics co-written by him and Nathan Tysen) is mostly just serviceable, though towards the end, Chanler-Berat has a stirring ballad, and Amélie’s three cronies from the shop perform a catchy number. Still, it all registers as very generic, and not really very French at all.

As far as this sort of Gallic whimsy goes, I found myself reminded of the far superior 2002 Michel Legrand musical “Amour” -- which this one sometimes resembles in tone -- but which, for all its virtues (a great cast headed by Melissa Errico and Malcolm Gets, a classy creative team including James Lapine and Jeremy Sams), came to grief at the box office.

I sincerely wish “Amélie,” which premiered at the Berkeley Repertory Theatre in 2015,  a better fate, but I can’t imagine this one having any greater appeal than its Gallic predecessor.