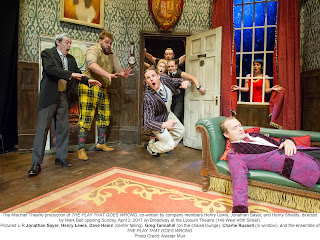 The conceit of this London import from the Mischief Theatre is that the (fictitious) Cornley University Drama Society -- which, as we learn in a pre-curtain speech, has had a fairly disastrous track record with their theatrical presentations -- is now attempting  its most ambitious project yet: a full-out mystery entitled “The Murder at Haversham Manor.”

We just know -- and, of course, the title tells us -- that everything is doomed to go disastrously awry, and indeed it does. Even before the play starts, we see the stagehands vainly attempting to mount the quirky scenery, such as a mantelpiece which resolutely will not stay affixed to the wall. The “lighting and sound operator” (played by Rob Falconer) -- who sits in the stage right box for most of the evening -- is plainly distracted from his task during the performance which leads to some unfortunate gaffes involving the stage effects..

The mystery itself concerns the death of one Charles Haversham (Greg Tannahill) which is being investigated by Inspector Carter (Henry Shields). Among the likely suspects are Charles’ fiancee Florence (Charlie Russell), his brother Cecil (Dave Hearn) with whom we learn she’s been having an affair, Charles’ faithful butler Perkins (Jonathan Sayer) and Thomas Colleymoore (Henry Lewis), Florence’s overly protective brother.

When the actress playing Florence is knocked out by a violently opened door, stage manager Annie (Bryony Corrigan at my performance) must go on in her stead. But when the true Florence actress regains consciousness, Annie is loathe to relinquish her time in the spotlight, and further mayhem ensues.

Apart from failing or missing props, dodgy scenic design, out-of-sync line readings and other incidents that spell disaster, the Cornley cast is a mass of idiosyncrasies. The Perkins actor can’t pronounce complicated words (e.g. cyanide, morose) and reads stage directions out loud; Florence is a blatant exhibitionist; Colleymoore repeatedly forgets his lines; Charles’ corpse simply won’t lie still; and Cecil is a hambone who thinks all the audience laughter is meant just for him, and exaggerates everything; he also has an aversion to kissing his leading lady. The very funny Hearn in that role also doubles as Arthur the Gardener and has some more silly business when he enters with his (imaginary) vicious dog.

The play itself -- by Lewis, Sayer, and Shields -- is a sort of “Noises Off” riff but seen entirely from the front of house rather than various vantage points as in Michael Frayn’s play.

For all the amusing things that transpire, and the truly impressive physical and comic skills of the marvellously adept cast, I felt the play tries rather too aggressively almost from the first moments. I love farce, especially British farce, but I found the relentless slapstick a bit tiresome on this occasion and would have much preferred building gradually towards it. Most of the audience at my performance seemed to love it, however, so perhaps I’m in the minority. In truth, by the second act, I found myself laughing with the rest.

The Mischief Theatre team has already spawned two follow-up shows, “Peter Pan Goes Wrong” and “The Comedy About a Bank Robbery,” with the current offering now in its third year in London. So, clearly the show is striking a responsive chord with many.