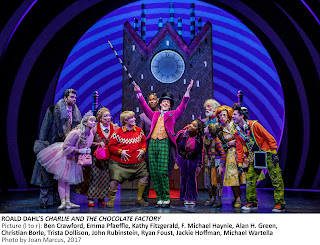 Here’s a surprisingly engaging musical retread of Roald Dahl’s novel and the popular movie, “Willy Wonka and the Chocolate Factory” (which had songs by Leslie Bricusse and Anthony Newley). This version had its genesis in London, but it’s apparently been greatly revamped for Broadway under the direction of Jack O’Brien.

Christian Borle is the fabled chocolate factory owner of the story, Willy Wonka. His factory has always been off-limits to the public but now, he has now come up with a marketing scheme in which five lucky children will win golden tickets (hidden in random Wonka bars) to tour the legendary place.

Sweet young Charlie lives with his widowed impoverished mother and four grandparents (all bedridden) and fervently wishes to win one of the tickets. Though he can’t afford to buy a chocolate bar, by a stroke of luck he finds a dollar bill which allows him to buy one. And sure enough, it contains the fifth winning ticket. He is then able to join four other children (all brats but here played by adults), and their guardians at the factory. Charlie’s Grandpa Joe (John Rubinstein) rouses himself from bed to join Charlie.

Composer Marc Shaiman and lyricist Scott Wittman have written the new songs (Shairman shares lyric credit), and three of the film’s most popular ones are thrown in to appease the fans who expect them (“Pure Imagination,” “The Candy Man,” and “The Oompa Loompa Song”). All are beautifully orchestrated by Doug Besterman. In fact, as an aural experience, the musical values here way out-class the movie. The new material sounds fairly generic on first hearing, though, but melds stylistically well enough with the film songs.

Jack O’Brien, who directed Shaiman and Wittman’s “Hairspray,” is at the assured helm again here, with choreography by the talented Joshua Bergasse who shows great ingenuity in his movements for the Oompa Loompa creatures (puppet bodies and human heads)

Willy’s dialogue is irreverent enough to keep the story from ever getting gooey, and Dahl’s sense of the macabre (which includes grisly ends for the bratty kids) is wickedly enjoyable.

Christian Borle is a perfect Willy Wonka, with an amusingly deadpan, dispassionate tone throughout as horrible things are happening around him. And his delivery of the songs is effortlessly masterful. His patter numbers are as deftly delivered as by a seasoned Gilbert & Sullivan performer.

Ryan Foust at my performance (one of three Charlie’s) was quite remarkable, handling his large role, beginning with his long opening number, with aplomb and avoiding cloying cuteness. John Rubinstein is another big plus as Grandpa Joe, creating an instantly likable and sympathetic character. The obnoxious (adult) children were played with appropriate nastiness by F. Michael Haynie (Augustus Gloop), Emma Pfaeffle (Veruca Salt), Monette McKay (Violet Beauregarde), and Michael Wartella (Mike Teavee). Their equally awful guardians were played by Kathy Fitzgerald, Ben Crawford, Alan H. Green, and, best of all, Jackie Hoffman respectively. Emily Padgett is very nice indeed as Charlie’s loving mother, and sings a tender “If Your Father Were Here” in place of the movie’s “Cheer Up, Charlie.”

Mark Thompson’s scenic design, apparently stripped down from London, is spare but stylish, and his costumes are colorful and fun.

David Greig’s book includes some very sensible updating, including references to cell phones and such, and tells the familiar story freshly and well.

In short, I had a good time, and I think you will do, with or without children in tow.